The cake is ready for its close-up

The cake is ready for its close-up

Audiences leaving theaters after watching “Little Forest” are finding it difficult to suppress their desire to either head to a nearby restaurant or go straight home to try cooking some of the home-style dishes featured throughout the film.

Centering on 20-something Hye-won (Kim Tae-ri), the drama unfolds as the character returns to her rural hometown, leaving behind the stressful life she lived in the capital city. Back in her hometown, she spends time farming and cooking meals made from ingredients she picks herself.

The adaptation of a Japanese cartoon-turned-movie adds a touch of magic throughout the film with shots of simple, yet delicious-looking food. Although the Korean remake focuses mostly on the relationship between the main protagonist and her friends - unlike the two Japanese releases, which mainly portray the main character’s cooking process - it doesn’t skimp on showing off its fair share of appetizing delicacies.

The dishes on screen range from recipes as simple as soy soup with cucumber noodles to a three-layered rice cake. But the most-talked-about dishes of the film have been the creme brulee, a dessert consisting of a rich custard base topped with a layer of hard caramel, and the fried acacia blossoms.

Behind each of the delectable bites on screen was food stylist Jin Hee-won, who mostly works in advertising. Having worked in the film industry for three years before jumping into advertisement work, “Little Forest” was a dream project for the food stylist.

“Upon reading the news that director Yim Soon-rye would make the Korean version of ‘Little Forest,’ I pulled some strings to connect with the filmmaker. After ensuring her that I wouldn’t make the food look too commercial, she said okay,” said Jin with a laugh.

To discuss the food she cooked and designed, Korea JoongAng Daily met with Jin for an interview last week at her work space in Yeonhui-dong, western Seoul. The following are edited excerpts. 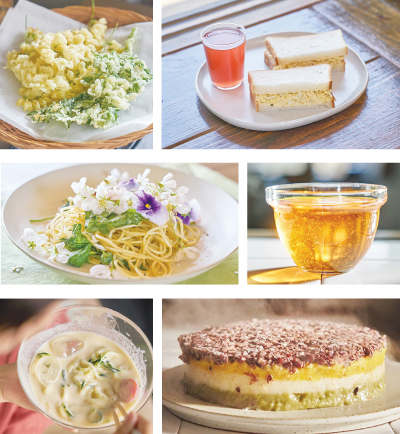 Q. You have worked in the film industry before becoming a food stylist. What made you want such a huge career change?

A. I have always loved food. I was curious about how different food is made. I studied film at university, which naturally led me to work in the film industry after graduation. Although I attended a nearby academy to learn about cooking rice cakes and Korean traditional sweets in my fourth year of university, I only thought of cooking as a hobby at that point.

But after working in film production for three years, I decided to take a break. While taking some time off, I enrolled in a college to study cooking. I was 28. Getting good grades and compliments from teachers drew me into cooking, and ultimately led me to want to become a food stylist.

What do you love so much about cooking?

You have to continuously use your brain when producing films. You have to use your imagination and even make up lies [when marketing]. But cooking doesn’t lie. You have to practice chopping radishes hundreds of times to be able to cut perfectly-shaped radish shreds. In short, you have to be honest when cooking. I found that honesty really attractive.

Since you had worked in the film industry, “Little Forest” must have been a very tempting project.

I loved the story ever since the cartoon was released in Korean. Although the content and its style is very much Japanese, I thought it would be interesting if it was remade in Korea. So after reading the news that director Yim Soon-rye would be working on the Korean remake, I pulled some strings and made a visit to Yim. I ensured her that I wouldn’t make the food seem like a commercial and begged for the position (laughs). Fortunately, the director said ‘yes’ immediately.

The way food is portrayed in films and commercials is completely different.

While commercials focus on how the food is presented in the end, food in films needs to have a story and needs to be smoothly connected to the story.

Although food in a movie needs to look visually appealing, they shouldn’t stand out so much that they take the audience’s attention away from the plot.

While the Japanese version of “Little Forest” spends a great portion of the film on the main protagonist’s cooking process, the Korean version mostly shows completed dishes. What did you focus on while styling the food in “Little Forest?”

Although most of the cooking parts were omitted, the director did shoot the entire process of cooking. I demonstrated how I cook, and actor Kim Tae-ri followed. After watching the completed movie, I realized how many of the scenes were taken out. Although it would have been personally more satisfying if the movie had added those cooking scenes, I knew that wasn’t in line with how the director planned to present the film, which was to stress the connection between the main protagonist and her friends.

What was your biggest concern while working on the movie?

My biggest concern was making sure that the foods didn’t visually stand out too much. I tried to naturally meld the foods into the scenes without making them conspicuous, like they usually are in commercials. It wasn’t easy for me to find a balance between making the food look too plain and too noticeable.

Although most of the food look plain, some of them, like the oil spaghetti with apple blossoms on the top, look so fancy that they don’t seem to match the film’s rural background.

In the film, the main character’s mother leaves her daughter after she finishes the College Scholastic Ability Test. The mother is depicted as a unique, experimental and independent person, and these characteristics can also be seen when it comes to her choices in cooking. When the main character was younger, her mother often cooked her unique dishes, which naturally influenced the kinds of food she cooks when she returns to her hometown after many tiring years in Seoul. Her mother’s personality also explains the reasons there are so many types of cooking utensils, even some from foreign countries, in the small kitchen in the countryside.

Which dish was the most challenging to prepare?

The three-layered rice cake was the most demanding. I didn’t know how sensitive rice cakes react to temperature. We shot the scene during the winter, so the cake kept freezing and then defrosting. We had to shoot the scene at least 15 times until we had used up all of the rice flour that we had taken to the shoot.

Would you like to work as a food stylist on another film?

I’m definitely willing to do that. I hope to do any kind of film that features food as an important prop. Usually in Korean films, food is considered to be something that the prop team takes care of. But I want to be able to take part in movies in which food is a crucial element of the film.