Lee denies a lot in 21 hours of interrogation

Lee denies a lot in 21 hours of interrogation 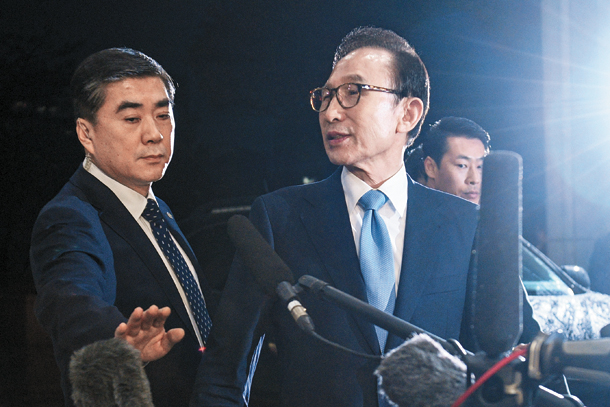 During 21 hours of questioning on a wide range of alleged corruption acts committed during his presidency, former President Lee Myung-bak denied most of the charges against him, prosecution sources said Thursday.

Lee, 76, returned home around 6:25 a.m. on Thursday after a lengthy questioning session at the Seoul Central District Prosecutors’ Office. Lee arrived at the prosecution at 9:23 a.m. on Wednesday and the questioning started at 9:49 a.m., according to the prosecution.

The question and answer session ended around 11:55 p.m., but Lee and his lawyers spent about six and a half hours to review the prosecution’s records of the interrogation.

According to prosecution sources, Lee denied most of the charges, including a main allegation that he is the owner of DAS, an auto component maker at the center of a corruption scandal.

Lee, who was in office from 2008 to 2013, actively defended his position, the sources said.

He is also accused of abusing his power as the president to retrieve DAS’s investment in a failed venture.

Lee is also accused of receiving bribes from Samsung Group by making them pay for DAS’s legal fee for a lawsuit in a U.S. court in return for issuing a presidential pardon to the conglomerate’s chairman, Lee Kun-hee.

When the prosecution presented evidence to prove the Lee is the true owner of DAS, such as a report that detailed a plan to hand over DAS’ management rights to his son, Lee Si-hyung, the former president appeared startled, the sources said. “You’ve prepared a lot,” Lee reportedly responded when it was presented, the sources said.

Lee is also accused of ordering the National Intelligence Service (NIS) to divert special operations funds to the Blue House. The prosecution also said Lee received bribes from businessmen and politicians in return for his influence.

While Lee denied most of the charges, he did accept some facts, a prosecution source said.

“There were some admissions,” the official said. “From the charges concerning the NIS funds, he admitted having received $100,000 from NIS Director Won Sei-hoon through Kim Hee-jung, a former personal secretary at the Blue House.”

Kim had confessed to the delivery when questioned by prosecutors earlier this year. He said he delivered the money to Lee’s wife, Kim Yoon-ok.

According to the source, Lee admitted that he received the money, but did not disclose where the money was spent. He also did not speak about his wife’s involvement.

Lee also denied that he had known about Samsung’s payment of DAS’s legal fee, the source said.

The source said Lee rejected testimonies of witnesses and alleged accomplices, who are his relatives or longtime aides, that he received bribes from the NIS, businessmen and politicians and that he is the true owner of DAS. He claimed that they made false statements to avoid heavy punishments.

No face-to-face meetings between Lee and the witnesses were arranged to cross-check the former president’s rejections.

Lee submitted logs of his schedules during his presidency, including overseas trips, to the prosecution. “It was extremely tight scheduling, indicating that he was very busy,” the source said.

“It was to explain his work as the president. We don’t think it was to serve as an alibi.”

It remains to be seen if the prosecution will seek a warrant to detain Lee for further investigation. Lee associates including Kim Baek-jun, former presidential secretary for general affairs, have already been arrested as accessories to crimes allegedly committed by Lee. At the time, the prosecution made clear that Lee is the main suspect.

When a suspect persistently denies charges during an interrogation, the prosecution often uses it as a reason to seek a detention warrant.

The prosecutors will brief Prosecutor-General Moon Moo-il about the case and wait for his decision on whether they will try to take Lee into custody. The prosecution said it has no plan to summon Lee for additional questioning.

Speculation is high that a decision on a detention warrant will be made early next week.

Prosecution sources said they want to wrap up the probe as soon as possible in order to avoid any political controversy because local elections are scheduled for June.