Chung puts up a fight, but Federer proves unstoppable

Chung puts up a fight, but Federer proves unstoppable

Korean tennis star Chung Hyeon was looking to settle the score with world No. 1 Roger Federer when he stepped on the court in the quarterfinals at the BNP Paribas Open at Indian Wells Tennis Garden in California on Thursday. 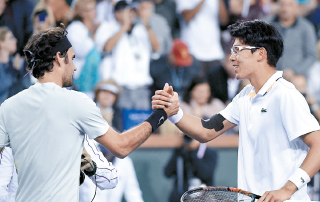 Roger Federer of Switzerland, left, and Chung Hyeon shake hands after the match at the BNP Paribas Open at Indian Wells Tennis Garden in California on Thursday. [AP/YONHAP]

Instead the world No. 26 lost in straight sets, 7-5 and 6-1, and once again it was Federer that continued on to the next stage of the tournament.

Although Chung put up a good fight in the first set, he wasn’t able to do much against the top ranked player. Chung got off to a slow start, which Federer capitalized on to take an early lead 3-0. In the fourth game, Chung seemed to find his pace, keeping his serve game and breaking Federer’s serve to win the next two games.

The long rallies didn’t stop Chung from losing his momentum, as he ended up tying the first set 5-5. The sixth game was a different story. Federer fell back on his ever-reliable serve - the Swiss star hit nine aces in the first set - to win the sixth and seventh games.

While Chung seemed to be tiring going into the second set, Federer was just warming up. A series of quick-fire games had the score 1-5 after six games. A final ace from Federer - his 12th in the match - and it was all over. Throughout the match Chung didn’t manage a single ace.

This was the second time this season that Chung has faced Federer. The two played each other in a highly-anticipated semifinal in Australian Open in January, but Chung was forced to retire in the second set because of a foot injury.

The Korean star gained wide popularity when he caught the tennis world by surprise after defeating Novak Djokovic of Serbia 3-0 in the round of 16 at the Australia Open. He went on to beat Tennys Sandgren of the United States in the quarterfinal before falling to Federer.

After a few seasons quietly working his way up the world ranking, Chung has exploded onto the international tennis scene this season, reaching the quarterfinals in five consecutive tournaments, starting with the ASB Classic in New Zealand in January.

Chung won $167,195 in prize money for reaching the quarterfinals in Indian Wells. The BNP Paribas Open is part of the Masters 1000 series, the third-highest tier of ATP tournaments after the four Grand Slam Tournaments and the ATP Finals. The tournament gives out more ranking points and prize money than lower level dates on the tour.

Though Chung failed to advance, he has once again made Korean tennis history, breaking his own record for the highest ranked Korean player ever. Chung is projected to move up in the world ranking to No. 23, making him the highest ranked Asian player. Japan’s Kei Nishikori currently holds that title at No. 25, but Chung is expected to pass him next week. Nishikori still holds the record for the highest world ranking ever by an Asian player, reaching No. 4 in 2015.