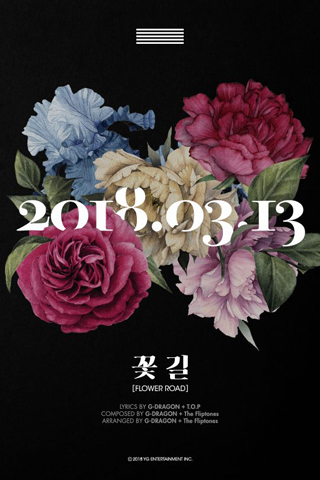 “Flower Road” ranked No. 1 on the new songs chart and three other charts of the Chinese service, which has more than 400 million users every month, according to YG Entertainment.

Released on Tuesday, the digital single also continued its reign on top of all eight Korean music charts, including Melon, Genie, Bugs Music, Mnet and Soribada, as of 9 a.m.

In Japan, it currently is on top of the Japanese iTunes’ top songs chart.

The song serves as a farewell from the five-member band to its fans before the start lengthy hiatus as band members begin their mandatory military service.

The group members came together to prepare the song ahead of time before they enlisted. The group’s leader G-Dragon and oldest member T.O.P wrote the lyrics to the song.

After rapper T.O.P, three fellow members - G-Dragon, Taeyang and Daesung - joined the military in the past few weeks.

Seungri is currently the only member left who has yet to enlist in the military.

He plans to enlist after releasing a solo album sometime during the first half of this year.