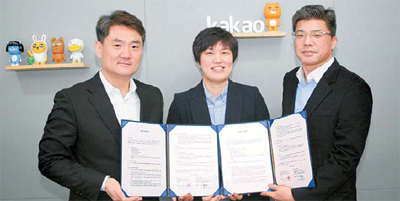 From left: Kim Jeong-ho and Lee Jin-hee, co-CEOs of Bear.Better, and Kuhn Ahn, head of the integrated business service center at Kakao, pose for a photo after signing a partnership. [KAKAO]

Kakao, operator of the KakaoTalk chat app, signed a comprehensive partnership with a social enterprise, Bear.Better, the companies said on Friday.

The two companies will be collaborating on finding jobs for people with intellectual impairments in cafeterias, supplying coffee beans, printing business cards and making flower wreaths.

“Bear.Better has been supplying coffee beans and cookies in the past several years,” said Kuhn Ahn, head of the integrated business service center at Kakao in a release. “We decided to expand the scope of our partnership with the company, which excelled in many aspects when compared to its competitors. We are even more pleased to contribute to indirectly hiring more of those with impairments.”

Bear.Better was founded in 2013 by Kim Jeong-ho, co-founder of NHN, the predecessor of Naver, under the slogan “those with development impairments that resemble bears [when it comes to slow behavior] can make the world better.” He now jointly runs the company with Lee Jin-hee, who controls internal affairs.

The Seongsu-dong, eastern Seoul-based company has been making cookies, bread and coffee, producing print goods ranging from business cards to calendars, leaflets and cards and delivering flowers in partnership with some 300 other firms. Having moved into the cafe business in 2015, the firm is now the largest social enterprise employing more than 120.

JOH & Company, the design and brand management company established and run by Joh Su-yong, the new co-CEO of Kakao who was appointed Friday, has been behind the firm’s creative side, managing the brand’s identity and designing the firms’ products and interior.

Over 80 percent of its employees have autism or other intellectual impairments, which makes it difficult to land jobs. It is estimated that only 17 percent of people with development impairments are employed and those with autism have less than a 1 percent employment ratio.

But Kim, according to an interview published earlier, thought it is “not impossible” for those with those impairments to get employed. It’s just that they cannot work within the same time frame and with the same efficiency as able-bodied workers. The company last year posted 10 billion won in annual revenues and has always been profitable.