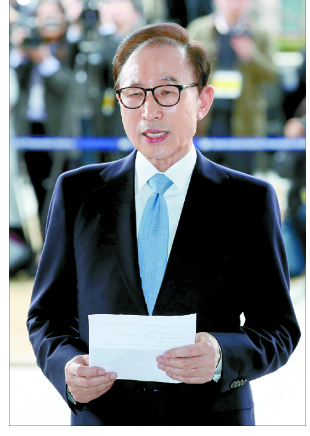 Lee, who was in office from 2008 to 2013, is being investigated over various corruption accusations. Of the 20 charges he is facing, one is an allegation that he had accepted a total of 2.25 billion won ($2.12 million) from Lee Pal-sung, then-chairman of Woori Financial Group, from 2007 until 2011. The banker allegedly paid the money to keep his job during Lee’s presidency.

According to prosecution sources, a memo was found in Lee Pal-sung’s home during a raid last month. It detailed his payments to Lee’s family, including the former president’s son-in-law.

The money came from Sungdong Shipbuilding and Marine Engineering, which was in serious financial trouble at the time, the prosecution sources said. The midsize shipbuilder was established in 2003 but its financial situation deteriorated in the aftermath of the 2008 global financial meltdown. Up to now, the firm received 9.3 trillion won in bailouts, but has not been turned around. The government decided earlier this month to let the company file for court receivership.

Lawyers of the former president said Friday that Lee told the prosecution during questioning earlier this week that he had no knowledge of the bribery.

The JoongAng Ilbo reported Friday that the prosecution has secured testimony from a former CEO of auto component maker DAS that former President Lee accepted large amounts of secret funds from the company for years.

According to sources from the legal community, the prosecution suspects that Lee had took about 3.5 billion won from DAS. The auto parts maker is technically owned by Lee’s elder brother, but prosecutors believe that Lee is the actual owner.

The Seoul Central District Prosecutors’ Office detected that DAS’s management manipulated accounts and raised slush funds from the mid-1990s until the mid-2000s, sources told the JoongAng Ilbo. The money was offered to Lee in cash for a decade and Lee’s close associates managed the funds, which went through multiple layers of money laundering, the sources said.

The prosecution suspects that Lee was taking money from DAS’s profits, an indication that the former president is the actual owner of the firm.

“Lee is not a shareholder of DAS, but he still took profit from the company through an indirect way,” a prosecution source said. “For this, we can use a misappropriation charge.

“We plan to use the tax evasion charge first because Lee did not pay the necessary tax by hiding the income.”

Starting from Wednesday, Lee was questioned by prosecutors for 21 hours. During the questioning, Lee denied most charges, including a main allegation that he is the owner of DAS and that he had raised massive slush funds through the company.

According to the sources, the prosecution secured testimony from DAS officials, including former president Kim Sung-woo, in January that a total of 3.5 billion won was offered to Lee from the company’s profits.

During the questioning on Wednesday, Lee’s lawyers reportedly rejected the accusation. “Because we are denying the presumption that Lee is the actual owner of DAS, we are also denying the logic that Lee received its profits,” one lawyer of Lee was quoted as saying.

Many charges Lee is currently facing involve DAS. Lee is also accused of abusing his power as the president to retrieve DAS’s investment in a failed venture. He is suspected of receiving bribes from Samsung Group by making them pay for DAS’s legal fee for a lawsuit in a U.S. court in return for issuing a presidential pardon to the conglomerate’s chairman, Lee Kun-hee.

Lee is also accused of ordering the National Intelligence Service (NIS) to divert special operations funds to the Blue House. The prosecution said Lee also received bribes from businessmen and politicians in return for his influence.

While Lee denied most of the charges, he did accept some facts, a prosecution source said.

Lee admitted that he had withdrawn 6.7 billion won from a bank account of his older brother Lee Sang-eun, the current owner of DAS, to refurbish his current residence in southern Seoul in 2012. The account was holding 15 billion won and 13 billion won was money raised by selling a plot of land in Dogok-dong.

Lee Sang-eun became the owner of DAS by purchasing the largest stake in the company with money raised by selling the plot. If the land actually belonged to the former president, then he should be seen as the actual owner of DAS, the prosecution said earlier

Although Lee insisted that he had “borrowed” the money from his elder brother, no document proves the loan, the prosecution said. Lee Sang-eun also said in previous questioning that he does not remember lending the money.

Lee also admitted that he accepted $100,000 from NIS but did not say where he spent the money.

“It doesn’t mean that we are admitting to the illegal nature of receiving the money,” a Lee lawyer said. “The money was earmarked for special operations on North Korea and it was used for special operations on North Korea. Revealing the specifics of the spending will expose the spying activities of our government, so the president did not say any more.”

The prosecution suspected that the money was used personally by Lee’s wife, Kim Yoon-ok, during a presidential trip to the United States. But Lee said the trip was a state visit fully funded by the host country.

The prosecutors have asked Prosecutor-General Moon Moo-il to allow them to seek a detention warrant against Lee, a prosecution source said Friday. The prosecutors have investigated allegations surrounding Lee for the past eight months, and concluded that the former president took about 11 billion won in bribes and created 35 billion won worth of slush funds.