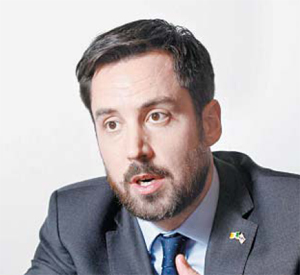 In a visit to Seoul on the occasion of St. Patrick’s Day, Irish Minister for Housing, Planning and Local Government Eoghan Murphy emphasized stronger ties between Korea and Ireland especially in this time of “an uncooperative world, where certain countries are withdrawing their cooperation from certain agreements.”

“At the moment Korea has issues with trade tariffs in its relations with the United States and at the moment we have [issues regarding] the U.K. and the EU, our closest trading partners of ours within the Union,” Murphy told the Korea JoongAng Daily on Monday. “Our response is to increase our cooperation and I think Korea is like-minded in that way.”

For St. Patrick’s Day, dozens of Irish government officials visit countries with Irish communities throughout the world to boost bilateral cooperation on trade, culture and education. Murphy highlighted some budding business ties between the two countries.

“I held a breakfast meeting today with over 40 businesspeople of the Irish-Korean Business Network and one of the Irish companies present was the Marco Beverage System,” he said. “The company provides precision engineering for higher quality coffee. So you can get that barista-style coffee but without it being as expensive in terms of employing people.”

Included in some 200 Irish companies exporting goods to Korea is Novaerus, an air purification company, which provides a system for ambulances and fire appliances here, and Flahavan’s, a porridge company that launched its products in Korea since 2014.

The minister emphasized the Irish market will be the only English-speaking one in the EU after Brexit is finalized.

“Our trade relations have doubled in the last five years so we see huge opportunities for both countries but we very much want to anchor that on things like education,” Murphy said. “So we have this program where 600 students travel to Ireland each year to be able to travel and work and study.”

The students get a two-year work visa upon graduation, he said.

“If you go to Ireland for a post grad degree you will get a two-year working visa, so you can go over to study and get a job at Google, Facebook or Twitter,” he said. “We are trying to promote those linkages so we can have more lasting and deeper ties between the two countries into the future.”

St. Patrick’s Day, which falls on March 17, is celebrated today with live music and dancing at the D-Cube City near Sindorim Station in western Seoul from 1 p.m. to 6 p.m.

For the occasion, the Seoul Metropolitan Government took part in what’s called Global Greening, in which green lights illuminate cities’ landmarks throughout the world. City Hall glowed green for an hour on Monday and Tuesday evenings.

As the minister of housing, Murphy said he is looking into Seoul’s urban housing plans.

“Ireland at the moment has a shortage of housings, so since last year we have a dedicated housing program called ‘Rebuilding Ireland’ to try to make sure we have more homes being built at affordable prices,” he said.