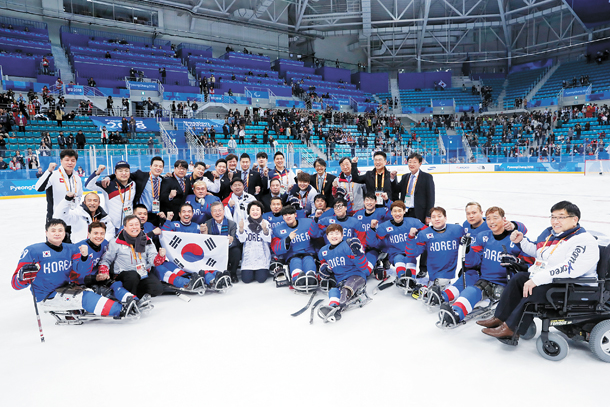 Defender Jang Dong-shin scored the winning goal at the Gangneung Hockey Centre in Gangwon to help Korea win bronze. It was Korea’s third medal at this Paralympic Games.

Korea reached the quarterfinals after it finished second in Group B, with two wins and one loss. The team, however, was trounced 7-0 by Canada in the semifinals.

Korea, supported by a massive home crowd including Korean President Moon Jae-in, was aggressive from the start, testing Italian goalkeeper Gabriele Araudo with four shots in the first period.

Korea experienced a frustrating second period as it continued to miss promising shots, attempting to break the scoreless tie.

Jung had a chance to break the deadlock five minutes into the second period, but his attempt was blocked by Araudo. Jang followed it with a shot one minute later, only to see his shot miss the net.

Toward the end of the second period, Italy had a two-minute power play after defender Kim Young-sung committed a holding foul by blocking Italy’s Sandro Kalegaris from moving forward with his hands. Korea came out of the penalty kill unscathed, stopping each of Italy’s opportunities over the two minutes.

Korea started the third period with a slapshot from Jung just 20 seconds after the whistle, but the puck failed to make its way into the net.

With just three minutes left in the game, Korea finally scored a goal after Jang redirected Jung’s pass into the net.

Italy pushed forward to get an equalizer, but Korea managed to hold on to its lead, and took home the bronze medal.

“I knew that the puck hit the blade of the sledge, but I actually didn’t know if the puck went in the net,” Jang said of his goal after the game. “It’s the first time for us to ever win a medal in para-ice hockey. We were so glad, so moved and excited.”

Korean coach Seo Kwang-suk, whose eyes were filled with tears after the game, said he wants to thank each of the players for working hard to make such a glorious moment.

“Their blood, sweat and tears from such a difficult environment, coming to this stage with nothing but trust…the tears are my gratitude for them,” he said.

In the meantime, the United States won the gold medal match against Canada 2-1, on Sunday, the last day of the PyeongChang Paralympics.

Though Canada was in the lead, scoring the first goal of the game in the first period, the two teams faced a tense final period when the United States eventually scored.

The game was tied until the last five minutes of the match, but United States forward Declan Farmer scored the winning goal, securing the gold medal for his team. He also scored the first goal for the team earlier in the third period.

This is the United States’ third consecutive gold medal for para-ice hockey at the Paralympic Winter Games.