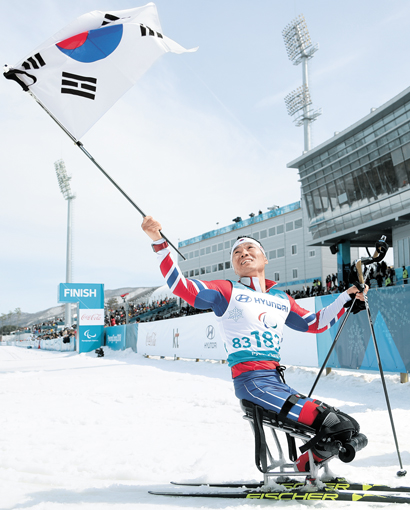 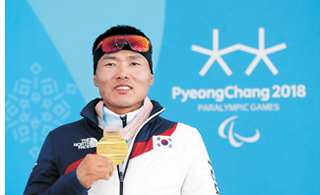 Paralympian Sin Eui-hyun holds up his gold medal from the men’s 7.5-kilometer sitting cross-country skiing event during a news conference at the Alpensia Biathlon Center in Pyeongchang County, Gangwon, on Sunday. [NEWS1]

Sin finished his race in 22 minutes and 28.4 seconds, a cool 5.3 seconds ahead of the United States’ Daniel Cnossen. Maksym Yarovyi of Ukraine won bronze, clocking 26 minutes and 21.3 seconds.

Sin ranked second at the first checkpoint, clocking 2 minutes and 13 seconds, but he quickly moved up to first. He maintained his lead from the second checkpoint until the end.

“During the race, I heard five seconds and thought it meant I was five seconds behind, so I tried really hard to catch up,” Sin said. “Even after I finished the race, I thought I was second until I saw the Korean flag at the top of the scoreboard.”

In para-Nordic, skiers race only using their upper body strength, so the events tend to be harder than Olympic cross-country skiing. “Two to three times more difficult,” said Sung Bong-ju, a researcher at the Korea Institute of Sport Science. “And in corners, athletes tend to lose their balance and fall more often. The sport requires strong determination to finish.”

But Sin makes it look easy. Throughout the Paralympics, he competed in seven cross-country events, racing a total of 60.8 kilometers (37.7 miles) not counting the team race, and despite getting little break in between, he finished in the top 10 in all six of his individual races. In biathlon 7.5 kilometers, 12.5 kilometers and 15 kilometers, Sin finished fifth, and in the cross-country 1.1-kilometer sprint, he placed sixth.

“Since I ski about five to six hours - or 50 to 60 kilometers - a day, I thought I would be physically ready to compete in all the events,” Sin said.

At his last event of the Paralympics, the 4 x 2.5-kilometer open relay, Korea finished eighth out of 12 participating teams.

Sin was born in Gongju, South Chungcheong, and lost both his legs in a car accident a day before his college graduation in February 2006. After he recovered from surgery, Sin struggled to come to terms with his impairment.

Wheelchair basketball changed everything. He started playing in 2009 and soon took up ice hockey and wheelchair cycling. Upon a friend’s recommendation, he also started skiing.

At first, it was more trouble than fun, but he enjoyed the challenge. He even started watching videos of other athletes and teaching himself techniques. During the summer, when there wasn’t any snow on the ground, Sin would attach wheels to his skis and race over the hills of Daegwallyeong County in Gangwon.

His hard work paid off.

Sin’s gold medal on Saturday is Korea’s first since the country began competing at the Winter Paralympics in 1992. Although Korea did not achieve its goal of a 10th-place finish in the medal table, this year’s Paralympics saw the country’s best finish, with one gold and two bronze medals.

During the closing ceremony, Sin carried the flag for Team Korea.