The Korean mixed wheelchair curling team left the Paralympics empty-handed after losing 5-3 to Canada in the bronze medal game at the Gangneung Curling Centre in Gangwon on Saturday. 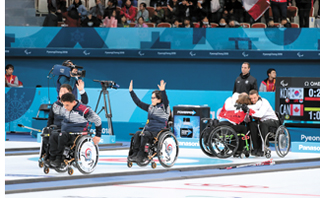 The Korean mixed wheelchair curling team, in navy, waves to fans after a 5-3 loss against Canada in a bronze medal game at Gangneung Curling Centre in Gangwon on Sunday. [YONHAP]

Though it wasn’t the finish the team or fans were hoping to see, they were still applauded by the 2,000 fans who visited the Curling Centre to cheer for the Oseong Avengers.

The Korean team had a shaky start by giving up two points to Canada in the first end. But with Cha Jae-goan’s triple takeout in the second, the team completed the end without giving away any extra points to Canada. Though Korea tried catching up by adding a point in third, Canada did not give up and scored two in the fourth.

At the end of the fourth end, Coach Baek Jong-chul changed the team’s third from Jung Seung-won to Lee Dong-ha, but that wasn’t enough to overcome the deficit, as they only scored a point in the fifth and the seventh. 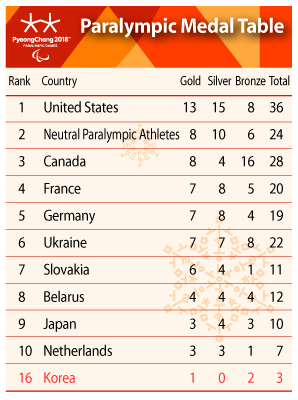 In the eighth, Korea was given a chance for an extra end once Lee’s shot landed in the center of the house. But after Cha’s shot stopped just short of the house, the team could not secure the two points they needed.

“I’m thankful to the fans,” said Seo Soon-suk. “I’m thankful that they visited and cheered for us. If we get an opportunity to medal next time, we’ll work harder trusting that we’ll win.”

The Oseong Avengers are considered the dream team of Korean wheelchair curling, as the best curlers from different teams qualified to become a team.

Upon completion of the Sochi Games, the Korea Wheelchair Curling Association decided to create a “dream team,” to medal at the PyeongChang Paralympic Games.

“I wish we worked harder,” Seo said. “I was thinking that I should have studied the game footage once more. I think there’s still a lot more room for improvement.”

After the bronze medal game, China defeated Norway 6-5 in an extra end to win gold. Not only was this China’s first gold in the sport, this was the country’s first ever medal won at the Winter Paralympic Games. The country started competing at the 2002 Games in Salt Lake City.