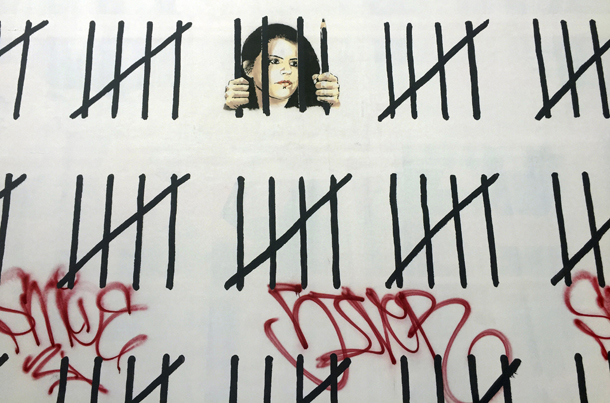 NEW YORK - British graffiti artist Banksy is drawing crowds to his New York City mural, but for an unfortunate reason.

It seems somebody added a signature tag to his artful protest of the imprisonment of a Turkish artist and journalist.

Plenty of pedestrians were getting a look Saturday at the graffiti scrawled in red across the bottom half of his 70-foot-long mural. The mural bearing the slogan “Free Zehra Dogan” was recently installed on the Houston Bowery Wall, made famous by Keith Haring in the 1970s.

The mural protests the jailing of Dogan, an ethnic Kurd, after she painted the Turkish flag flying over the rubble of a destroyed town.

According to human rights advocacy group PEN International, Dogan was convicted in March 2017 of “propagandizing for a terrorist organization.” It says Dogan argued at her trial that painting a real-life event based upon a photo taken and disseminated by the Turkish military was part of her work as a journalist.

Banksy’s 70-foot-long mural consists of black tally marks representing Dogan’s days in a Turkish prison. Dogan is shown jailed behind one set of marks, grasping one that’s transformed into a large pencil. A lower corner of the mural bears the slogan “Free Zehra Dogan.”

“One year ago Zehra Dogan was jailed for painting this watercolor of a photograph she saw in the newspaper. Protest against this injustice...” Banky said on Instagram. “Sentenced to nearly three years in jail for painting a single picture.” AP