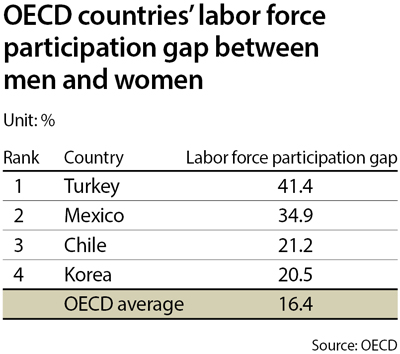 Korea has the fourth-highest gender gap in labor force participation among member countries of Organization for Economic Cooperation and Development (OECD), which is primarily due to the large number of married Korean women who quit their jobs after giving birth.

Countries with higher gender gaps than Korea include Turkey, Mexico and Chile. The central bank noted that Korea and other Asian countries like Japan show an abrupt drop-off in female participation in the labor force, which indicates that many women leave their jobs after age 30.

“There is a growing number of women giving up their jobs around 30 because of marriage and childbirth and rearing issues,” said Kim Sang-woo, economist at the Bank of Korea’s research department.

While the female employment rate gradually increased in most OECD countries, Korea’s largely remained flat. The rate of Korean women in the labor force was 58.4 percent in 2016, again below the OECD average, which was 63.6 percent.

A report from the BOK raised the need to support working mothers and create positions with flexible working hours, using European countries as examples.

“The increase of jobs in the service sector and part-time work and the childcare subsidies contributed to more women in the labor force,” the report said. The BOK report warned, however, that more part-time positions can translate into lower-quality jobs for men.

The OECD also pointed to poor female economic empowerment as a great loss to the Korean economy.

“Women in Korea have made great strides in educational attainment as changing family structures [such as fewer children] have contributed to parents spending more on education per child,” it said in the report, titled “Closing the Gender Gap.”

The OECD noted that changes should be made at a deeper level beyond policy support.

“As long as workplace cultures involve long working hours, socializing after work, and a seniority-based promotion and payment system which punishes women for leaving their job on childbirth, social policy reform will have limited effect.”