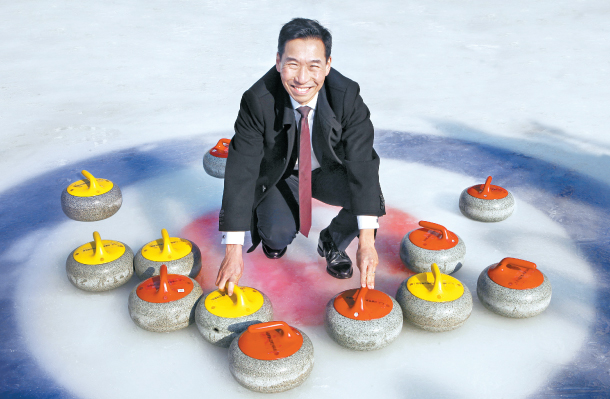 Australian Ambassador James Choi holds the stones on the ice rink in front of Seoul City Hall in central Seoul on Feb. 26, where Choi; Seoul Mayor Park Won-soon; Park Eun-soo, deputy chair of the Seoul Sports Association for the Differently Abled; Min Byong-seok, from the Seoul city government’s wheelchair curling team; and others participated in a game of wheelchair curling to raise awareness for the Paralympics. [PARK SANG-MOON]

Australian Ambassador to Korea James Choi has run through the Copley Square in Boston, across the Harbour Bridge and up the steps of the Sydney Opera House, finished the race at the Melbourne Cricket Ground — and met some interesting people on the starting line of a marathon in Seoul.

“I met the Deputy Chair of the Seoul Sports Association for the Differently Abled Park Eun-soo at the start line when I was running the JoongAng Seoul International Marathon in November,” Choi said. “I asked him if there is anything I could do to raise the profile of the Paralympics.”
In four months’ time, the ambassador was throwing a stone in a game of curling on the ice rink in front of Seoul City Hall, along with Park, Korean athletes and Seoul Mayor Park Won-soon.

“Paralympics are given less priority — the Winter Olympics usually gets a higher profile,” he said. “My interest was in making sure that I could support our participation in the Olympics proper but also the Paralympics.”

Choi has carried the torch for both the Olympics and Paralympics during the relays in Seoul. And true to his passion for the Paralympics, the top envoy met with the Korean wheelchair curling team at their training center in Icheon, Gyeonggi, in December, months before they were to compete at the PyeongChang Paralympic Games.

The ambassador and sports aficionado sat down with Korea JoongAng Daily to discuss his latest sporting endeavors in Korea — including the time he ran the naked marathon in subzero temperatures in Pyeongchang — as well as in Melbourne and Sydney. The following is an excerpt of the interview.

Left: Australian Ambassador James Choi, in blue, running the Melbourne Marathon in 2008, where he set his record time of finishing a full marathon at 2 hours, 57 minutes and 28 seconds.

Q. What was it like to meet the Korean wheelchair curling team?

A. I was most impressed with their approach and commitment to the Games. I was moved by how professionally they are preparing for it. I was also amazed with the facility — it is world class, giving opportunities to people with physical impairments to train in a friendly environment. I heard their individual stories as to how they became impaired and why they decided to join the curling team.

The athletes taught me the techniques of wheelchair curling. Because there is no sweeping, a lot more precision and calculation is involved in the athlete throwing the stone. That’s why they call it chess on ice. It’s really hard because you are in a sitting position and you don’t get a sense of close-to-the-ground feel.


What has it been like engaging with the locals in Korea through sports?

One of the more memorable experiences was when I won a point against Ryu Seung-min in a table tennis match hosted by Lee Ailesa in September, although I think he was being generous (laughs). But that’s what I like about sports, it allows you to meet people that you ordinarily wouldn’t, because it cuts across sectors — sports is universal, it’s one of the very few things that cuts across societal boundaries, across countries, and it’s something everybody shares regardless of where they come from and what your background is. That’s why I really like engaging in sports wherever I go.


Is there a niche in the Australia-Korea cooperation on sports?

The Australian Paralympic team is meeting with two associations here on sports and impairment to see what bilateral cooperation can be built up. I think the Korean team is really good at table tennis for those with physical impairments and Australia is really good at basketball for people with impairments. It will be a good opportunity for exchanges on the Paralympics side.


How supported are athletes with impairments in Australia?

All sports facilities in Australia are designed for participation of people with impairments, so they are all given the opportunity to participate in any sports, whereas in Korea I think there is a limitation.

There was a group of college students here, called the dream teams, who are part of the initiative that was supported by Rehabilitation International Korea. They made a trip to Australia to look at Australian policies in how we look after people with impairments.

They drafted a report afterwards and I think the main difference they pointed out between Korean and Australian policies for those with impairments was on the classification system for impairments in Korea. So the way in which you get support depends on your classification here, whereas in Australia we got what’s called the disability insurance scheme — it’s a tailor-made program that supports individuals based on their abilities and weaknesses, to come up with a tailored package of support that allows individuals to become productive members of society. It was legislated about four or five years ago, under the Julia Gillard government. That’s what this team was very impressed with.


What sporting events in Australia would you like to introduce?

The Australian Open is a fabulous event in Melbourne. One of the reasons why I raise it is that Chung Hyeon did so well. He certainly raised the profile of tennis in Korea — he’s the first Korean to reach semifinals for the tournament. Another event I’d recommend is the Australian Football League final in Melbourne, where some 100,000 people come in onto the cricket ground, and I can’t describe the atmosphere — it’s the best sporting crowd I’ve seen anywhere in my life.

I’m also a keen runner, so I’ve done the marathons in Sydney and Melbourne. I would recommend especially the Sydney Marathon because it’s iconic — you start at the northern part of Harbour Bridge, you cross the bridge, you loop around the iconic sites in the city and you finish the race on the steps of the Opera House. It’s a magical experience.

In Korea, I’ve run in Seoul, Daegu, Daejeon, Busan, Muju, and Pyeongchang — at Pyeongchang I ran the naked marathon in January. One thing I noticed about Korean marathon runners is how professional they are: they have various running clubs and you see them running along the Han River regularly as big groups. I’d love to join them, but with my schedule I usually have to run very early in the morning and I don’t think I can convince other people to run with me (laughs).

But I would also like to recommend that more people visit Australia for the ski slopes. Not many people realize we have snow in Australia. But we have good snowfalls and ski resorts like the Thredbo, Falls Creek and Perisher Valley. The Korean national team came over last summer and trained in Australia.


What are your thoughts on the latest sports diplomacy between the two Koreas? 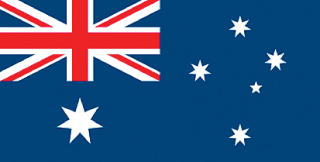 Australia and Korea established diplomatic ties in 1961 but initial contact between Australians and Koreans dates back decades earlier. The first recorded contact was in 1889, when Australian missionaries landed in Busan. Australia sent some 17,000 troops to the Korean War, of whom 340 died. Australian veterans visit Korea periodically.

Korea holds a two-plus-two ministerial meeting with just two countries: the United States and Australia. In the latest meeting in October, Korea and Australia agreed to cooperate with more high-level strategic dialogues and people-to-people ties such as the New Colombo Plan, which sponsors Australian students to study in Asia.