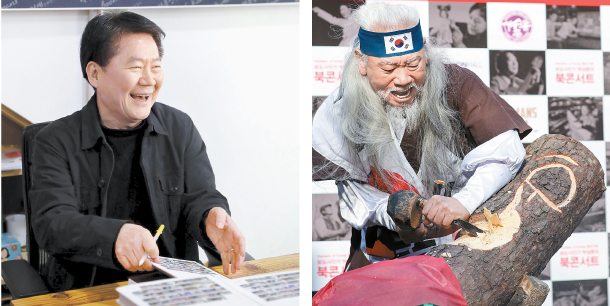 Capturing Korean creators ?Following the release of his new photo book titled 밐umans of Korea,?photographer Park Sang-moon, left, who runs a series of photo stories in the Korea JoongAng Daily, held a book launch event on Saturday at Yesultong in Jung District, central Seoul. A total of 33 experts who have been photographed by Park performed at the event. Kim Jong-heung, above, demonstrated how to carve wood to make jangseung, traditional wooden totem poles. [YONAHP]

Several bagpipe bands led a parade made up of more than 100 marching bands after Democratic Governor Andrew Cuomo spoke briefly, calling it a “day of inclusion” and adding: “We’re all immigrants.”

Varadkar, Ireland’s first openly gay leader, watched the parade at St. Patrick’s Cathedral before joining the march. In remarks, Cuomo said it was “my pleasure to march with him,” especially in a parade that long tried to ban gay people.

The parade, beginning at 11 a.m., lasted nearly six hours. An estimated 150,000 marchers made the 1.4-mile (2.2-kilometer) trek past Central Park, the Cathedral and Trump Tower.

A major event since the mid-1800s, the parade has celebrated Irish culture and Irish immigrants, who once faced nativist calls for their exclusion from the work force - and from the country - when they began arriving in the city in huge numbers during the Irish Famine.

In the 1990s, parade organizers were involved in annual court fights over whether to exclude openly gay groups from the march. This year, at least two groups in the parade had banners identifying marchers as gay, lesbian, bisexual or transgender.

For the 167th time, the lead group marching in the parade was 800 members of the 1st Battalion, 69th Infantry Regiment, of the New York Army National Guard. Cuomo joined them. The regiment, once predominantly made up of Irish immigrants, first led the parade in 1851 as a deterrent to anti-immigrant violence.

Judy Hughes, whose father used to march with the 69th Infantry Regiment, also known as the “Fighting Irish,” said she’s been attending the parade “since I was a little girl.”

Her husband, Bill Hughes, a retired police officer who marched in the parade for 10 years, looked on as a band passed. “It’s better being on the other side,” he said.

This year’s grand marshal was Loretta Brennan Glucksman, chairwoman of the American Ireland Fund, a group that has raised millions of dollars for philanthropic projects in Ireland, including funding for integrated schools for Catholic and Protestant children in Northern Ireland.

She rode along the parade route in a Central Park horse carriage driven by a family friend.

The parade was a familiar occasion for Matthew McCrosson, 68, who has frequently marched in it during the past half-century.

“The parade truly signifies the Irish investment over 250 years in the greater New York area,” McCrosson said. “The parade represents not only Irish, but people from all nationalities.”