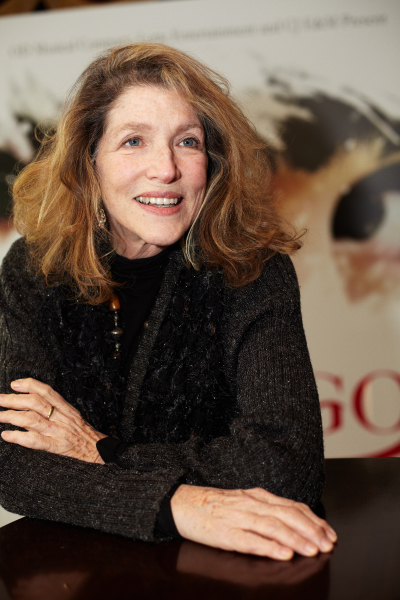 Lucy Simon, who composed music for the new musical “Doctor Zhivago,” recently visited Seoul to see the premiere of the new version of the show. [OD COMPANY]

When the Broadway production of “Doctor Zhivago,” based on Boris Pasternak’s 1957 novel of the same name, premiered in New York in 2015, it faced harsh criticism from critics - the New York Times dubbed the show “Doctor Zzzzhivago” for failing to keep the audience awake. The show came to an early end after only 26 previews and 23 performances due to low ticket sales. Before opening in New York, it premiered in Seoul in 2012, as one of the producers was Shin Chun-soo of the OD Company.

The show’s composer Lucy Simon says that the show was also a disappointment for her, as it didn’t have the “vibrancy of the humanity of the people.” After the Broadway show, Simon and Shin sat down together to create a new production, this time more about romance and humanity.

“I saw the new production here and I’m so happy because it is finally the show that I wanted,” said Simon, who recently visited Seoul for the premiere of the new “Doctor Zhivago,” which opened at the Charlotte Theater in Jamsil-dong, southern Seoul, on Feb. 27. The show will run to May 7.

“The show is now romantic and human,” she added. “It now tells a story of people who overcome great difficulties as they do in this revolutionary war, to be able to be artists. It’s about an artist.”

The story takes place between the Russian Revolution of 1905 and World War II, revolving around the protagonists Yuri Zhivago and Lara. Because the Russians could not write about what they wanted at the time, Pasternak’s book had to be published in Italy in 1957. Simon says that she composed the music hoping that the show focuses on this aspect of the artists in Russia, like Pasternak, who “couldn’t write honestly; about the beauty; about love or family.”

To learn more about the new version of “Doctor Zhivago” and its music, the Korea JoongAng Daily recently sat down with Simon at the Charlotte Theater. The following are edited excerpts from the interview.

The new production of “Doctor Zhivago” based on Boris Pasternak’s novel of the same name is being staged at the Charlotte Theater in Jamsil-dong, southern Seoul. Compared to the previous productions, this new version, according to Simon, focuses more on romance and humanity. [OD COMPANY]

Q. Why were you and Shin so disappointed about the initial production?

A. It was very hard for me to go forward with that production because that wasn’t the production in my heart. The director back then was much more interested in creating war and I was much more interested in creating romance. I’m being awfully honest but Shin and I, after that performance in New York, sat down together and said we should do a production that we want. I think that this production has all of the elements that mean a lot to me. It’s more human, it’s more realistic and it’s about people and that’s how the music was written. The former production was stiff. I’m being modest, but the heart of the show is in the music. The former production, the music and the scenes didn’t really match but this one matches much better. Shin and Matthew Gardiner, who directed this production, have allowed it to breathe.

You said you think the character of Komarovsky in this production isn’t portrayed as brutally as you would’ve liked. Why is that?

Komarovsky represents the worst of Russia. He is an aristocratic man and it’s not that far from what we are experiencing today with women being abused by men. Komarovsky has abused Lara. He has lusted for Lara and that is the basis of his love for her. He desires her and he wants to control her. I felt in this production that Komarovsky was held back from being really sexual with Lara. What I heard was that the women here would get offended by it. But this is what men have done to women. They’ve abused women as it can evidently be seen through the Me Too movement. So I told the director that Komarovsky should be more possessive, for example, showing him grabbing Lara’s breasts or something when he comes in. But apparently, women didn’t want that. But that takes away, from my perspective, what Komarovsky really is like. If we don’t see him being what he is, it makes him not that different from the other men in her life.

Why did you want to emphasize humanity and love in the new version so much?

Yuri Zhivago, the hero of “Doctor Zhivago,” lived a very difficult life because he lived amidst this upheaval of oppression. When Bolsheviks were in power, they didn’t allow people to have the freedom of expression they wanted to have. It was a very limited life. But Yuri Zhivago was a poet and he was able to write about love, about Lara, the love of his life. And there’s a song called “On the Edge of Time” in the musical, which is a love song. What the song says, which became a poem that everybody all over the world knows by heart, is that I can live forever and that our love is so strong that it will live beyond the edge of time. And it really does. We are hoping that this production will also live “on the edge of time.”