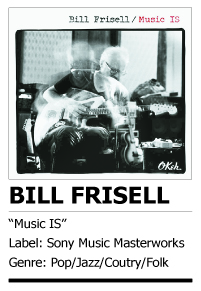 There are many Bill Frisells on “Music IS,’’ and they are all terrific. For his first solo album in 18 years, the guitarist beyond category touches upon a wide range of genres.

Frisell plays pop, jazz, country, folk and the blues, as well as classical, theatre and movie music, sometimes mixing styles on a single tune. He uses droning, reverb, loops, distortion, bleeps, blorps and even a ukulele.

There are no drums and no vocals but plenty of overdubs, and it’s very much a studio creation, with the emphasis on tone and texture. Frisell explores his 15 original compositions in layers, both by adding and peeling away. He reprises several songs recorded previously in different arrangements.

The album’s not a showcase for Frisell’s extraordinary virtuosity, with tempos mostly slow to moderate. He rocks on “Think About It,’’ but for less than a minute. Sometimes the beat falls away, such as on “Go Happy Lucky,’’ where he plays R&B without much rhythm. AP