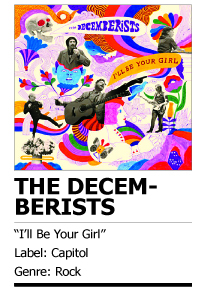 Frontman Colin Meloy wanted the Decemberists’ new album to reflect the mood of the times, and sadly it’s even more topical than intended.

The Oregon band began performing the song “We All Die Young’’ onstage a year ago, and in the wake of recent headlines it will bring tears on tour, recent events in Florida transforming the singalong into an anthem that pairs jarring words with defiantly exuberant music buoyed by a kids’ chorus.

Such is the tone of “I’ll Be Your Girl,’’ which leavens Meloy’s dark lyrics with humor and arrangements as colorful as the album cover. “Severed’’ threatens violence via ’80s synth pop and the strummy, drummy “Starwatcher’’ makes calamity sound palatable. There’s also “Everything Is Awful,’’ written in the wake of the 2016 election, which the band performs as a children’s song for adults. The Decemberists’ albums always offer an opportunity for vocabulary expansion, and here Meloy puts petard, liminal and cusping to music. He’s at his most literary on the fable “Rusalka, Rusalka/Wild Rushes,’’ which reads like a Russian novel. It doesn’t end well, which is no surprise. We all die young. AP