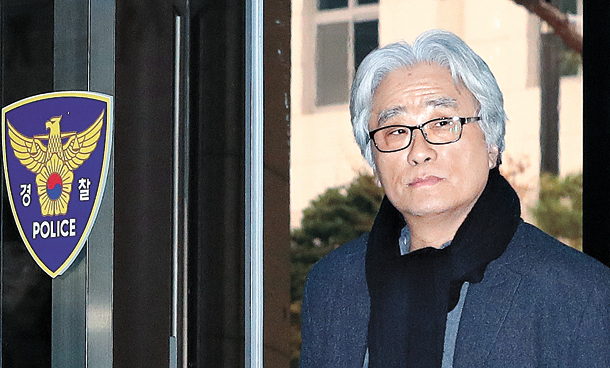 Police questioned the prominent playwright Lee Youn-taek over the weekend on allegations that he sexually assaulted more than a dozen women in his theater troupe.

He arrived at the headquarters of the Seoul Metropolitan Police Agency on Sunday morning for a second day of questioning, following a 15-hour interrogation the day before.

Lee, 65, is one of several high-profile Korean men accused of sexual misconduct by the country’s widening Me Too movement.

After arriving at police headquarters around 10:24 a.m., Lee told reporters, “I’m giving testimony in accordance to what really happened,” when asked whether he admitted to the allegations.

He is suspected of having sexually harassed or raped more than a dozen women who were working for him from 1999 to June 2016. After Sunday’s interrogation, the police are expected to make a decision on whether to seek a warrant for his arrest.

After he was questioned on Saturday, Lee offered a fresh apology to victims and promised to cooperate in the investigation. When reporters asked whether he listened to the victims’ testimony, Lee said, “I don’t know about them. No.”

The first woman came forward last month, and 16 have since filed complaints with prosecutors seeking investigation. The prosecution has assigned the case to police and banned Lee from leaving the country.