Village learns how to live with cats

Village learns how to live with cats 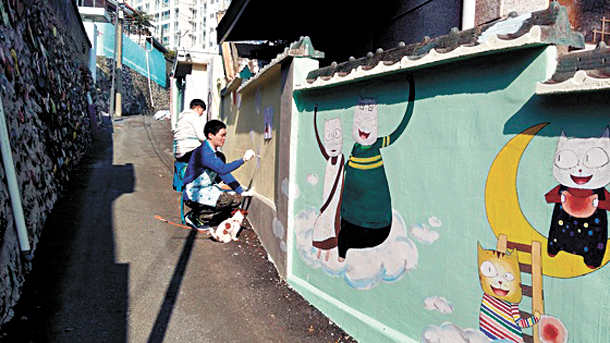 Murals with animated cats adorn the alleys of Hyoja Village in Chuncheon, Gangwon, which strives to make a name for itself as Korea’s cat village. [HYOJA-1-DONG COMMUNITY SERVICE CENTER]

CHUNCHEON, Gangwon - Hyoja Village in the capital city of Gangwon province is home to 2,200 households, 5,200 residents - and an untold number of homeless cats.

The city government used to get endless phone calls complaining about the cats, their rummaging through garbage and their loud ways of mating.

Local “cat moms” loved the cats, felt sorry for them and left food out for them, putting them in conflict with Hyoja villagers who called for ruthless cat population control measures.

In 2012, the Ministry of Culture, Sports and Tourism’s Arts Council Korea came up with a solution: transforming the neighborhood into the nation’s first cat village. It painted colorful murals of cats on walls. And now a 1.23-kilometer (0.8-mile) stretch of alley is a cat sanctuary.

“It’s the first step of cohabitation,” said Eum Mi-kyeong, who oversees general affairs in Hyoja Village. “Over 100 cats are living in pain here, hiding in the shadows away from people’s attention.”

In order to prevent feral cats from digging through garbage, Hyoja’s community service center plans to set aside 8 million won ($7,520) this year to operate three food shelters for them.

“The cats used to get into garbage bags with fish bones inside,” said an 82-year-old resident surnamed Lee. “I’m convinced they’ll start heading to the food shelters once they realize there’s enough to eat over there.”

Considering that 60 percent of Hyoja’s population is aged 65 or above, Oh Geum-ja, head of the village, said jobs will be given to senior citizens to run the food shelters.

“If we manage to pull this off, we will create an environment in which Hyoja residents live peacefully with the felines,” Oh said. “I’m sure it will attract tourists.”

To take its cat project to the next level, Hyoja plans to set up a feline-inspired tower in the middle of the village by reconstructing a wooden pavilion and tearing down some empty houses nearby to create a playground with cat-shaped features.

Jo Eun-sung, a local documentary director who filmed “I am a Cat” (2017), a piece on feral cats in Korea, Japan and Taiwan, is expected to make another film on Hyoja Village, depicting how its residents went from loathing the animals to embracing them as part of a community. Filming begins late this month and is scheduled to last for a year.

On cat population control, the Chuncheon city government plans to expand its trap-neuter-return, or TNR project, through which the animals are captured, neutered and then released again. Some 350 feral cats have undergone the procedure since 2016.

The overall reaction from Hyoja residents has been positive on the cat village initiative, though some are still opposed to spending tax money on food shelters for them, said Kim Kyo-yun, head of the Chuncheon Agricultural Technology Center.

“We’ll still have to search for a solution,” he said.