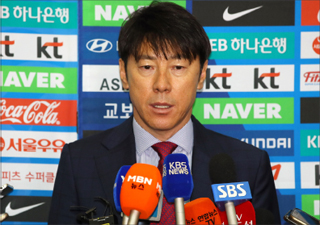 Son is one of the 23 players that were selected for Korea’s upcoming World Cup tune-up matches in Europe. Korea, ranked 59th in the latest FIFA rankings, will take on No. 24 Northern Ireland at Windsor Park in Belfast on Saturday and face No. 6 Poland three days later at Slaski Stadium in Chorzow, Poland.

Son has so far netted 18 goals this season for Spurs, 12 of which came from the English Premier League. The 25-year-old is certain to represent Korea at the World Cup in Russia.

Son mainly plays for his London club as a left wing forward, but Shin said he first plans to use the former Bayer Leverkusen man as one of the two strikers up front.

“In my head, Son plays in a two-forward system,” Shin said to reporters at Incheon International Airport before departing for Europe for the friendly matches. “But if Son can create better synergy with other players, I can let him play on the wings.”

Son has occasionally played at center forward for Spurs, especially when striker Harry Kane was absent with injuries. Shin said he wants diverse movement from forwards.

For the upcoming friendlies against Northern Ireland and Poland, Shin said he will test his attacking options and improve the defense. He departed with 14 players for Europe. The remaining nine players will join the team later.

“The two friendlies will be a good opportunity to test our abilities ahead of the World Cup, since Northern Ireland and Poland are like Sweden and Germany,” Shin told reporters at Incheon International Airport. “We’ll find good things and unexpected things through the friendly matches. We’ll prepare for that and will fix problems.”

Korea is in Group F at the World Cup in Russia, along with defending champions Germany, Mexico and Sweden.

“I know we’ll also have to get good results in the friendlies, but even if we’re not good, we have to work hard for the World Cup,” he said. “What’s important is not Northern Ireland or Poland. What matters is our result against Sweden and Germany.”

Five of the eight defenders on Shin’s squad are from Jeonbuk Hyundai Motors. Jeonbuk has shown weak defense this season, conceding 13 goals in seven matches in the K League 1 and the Asian Football Confederation Champions League.

Shin, however, said he believes Jeonbuk’s back four is still the best in the K League 1.