Park In-bee wins her first tournament of the year

Park In-bee wins her first tournament of the year 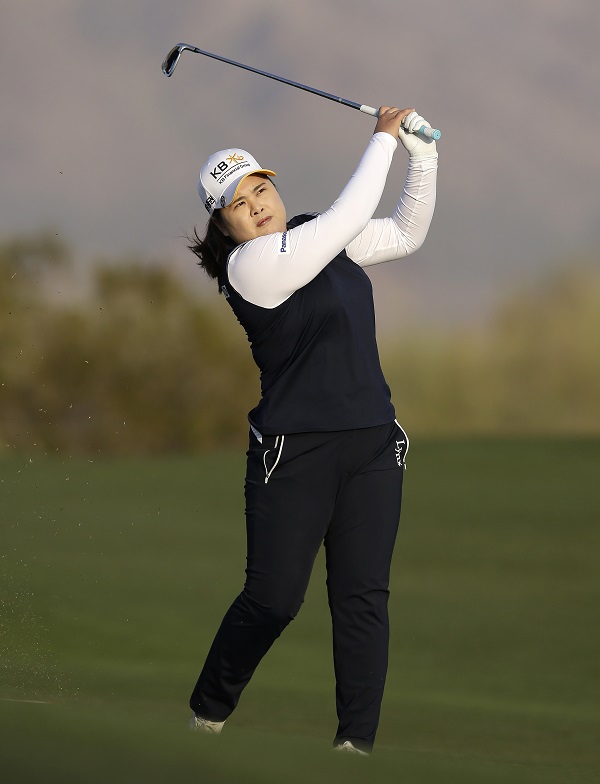 In only her second tournament of the season, LPGA Hall of Famer Park In-bee won the Bank of Hope Founders Cup at the Wildfire Golf Club at the JW Marriott Phoenix Desert Ridge Resort and Spa in Arizona on Sunday.

With a bogey-free round of 67, five under par, Park finished five shots ahead of the three players behind her — Laura Davies of the United Kingdom, Marina Alex of the United States and Ariya Jutanugarn of Thailand.

Park, who changed her putter from a mallet to a blade this tournament, started the final round with a one-shot lead from her impressive third round of 63, nine under par. She got off to a great start with a birdie, making a 1.5-meter (5-foot) putt on the first hole.

Keeping her trademark poker face throughout the round, Park maintained her lead by making par saves in the front nine. She started to extend her lead in the par-4 12th hole. When her second shot landed short of the green, she took out her putter and successfully made a 6-meter birdie putt.

She continued her birdie streak in the next three holes to extend her lead further. On the par-5 15th hole, Park’s second shot hit the bunker short of the green. But with an exceptional bunker shot, Park clinched her 19th career victory.

“I didn’t expect to win very early [in the season], I mean obviously, after a long break,” Park was quoted as saying on the LPGA website. “In Singapore, I felt like my ball striking was quite good and I just needed to work on the putter a little bit. It has worked pretty good this week.”

It was only her second tournament of the season after she missed the majority of the 2017 season due to a back injury. Park won a tournament earlier than many expected in the run-up to the LPGA’s first major, the ANA Inspiration, which starts on March 29.

Throughout the weekend, Park missed only six fairways, hit 60 out of 72 greens and made 115 putts. In the last two rounds of the tournament, Park didn’t score worse than a bogey on any holes.

With her victory, Park won $225,000 and became the second Korean golfer this season to win an LPGA Tour event after Ko Jin-young won the ISPS Handa Australian Women’s Open on Feb. 18. This was Park’s first win since the HSBC Women’s Champions in March 2017, as she didn’t play in tournaments after the British Open in August due to an injury.

During the 2016 season, Park had to miss half of the season due to a thumb injury, but she still managed to win gold at the 2016 Rio Olympics, where golf returned to the Games for the first time since 1900.

The U.K.’s Laura Davies was aiming for her first victory since the 2001 Wegmans Rochester International, but finished four shots behind Park at 14 under par. At age 54, Davies hoped to surpass Beth Daniel’s record of winning a tournament at age 48 at the 2002 Canadian Women’s Open, but had to walk away with a second-place finish.

“It would have been huge,” Davies said. “I knew what the record was and that I hadn’t won in who knows how long. It was as nervous as I’ve ever felt. I was four over after six holes on Thursday so I’m quite pleased [with] how I fought back.”

Of the other Korean golfers in the tournament, Chun In-gee shot six under par to finish tied for fifth at 13 under par in her first top-10 finish of the season. In the third and fourth rounds, Chun hit 100 percent of the fairways. Chella Choi finished tied for seventh at 12 under par while Amy Yang and Park Hee-young finished tied for 11th at 11 under par.