The Gangneung Curling Center may have only just closed its doors on the last game of the 2018 PyeongChang Paralympics, but Team Kim are back on the ice - this time in North Bay, Canada - giving Korea’s legions of recent curling converts something to cheer about. 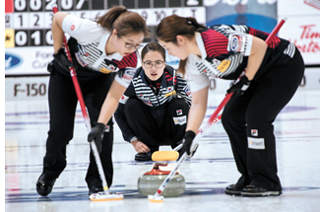 In fact, as of 7 p.m. Monday, the Korean team has so far won all of its round robin games, topping the table in first place alongside Canada, Russia and Sweden.

“With people’s sudden interest in curling, I feel more pressure,” said Kim Yeong-mi, the team’s lead. “I’m a little worried because I didn’t get to train a lot after the PyeongChang Olympics.”

Kim Yeong-mi became a household name after skip Kim Eun-jung emphatically yelled her name throughout the Olympics. Those shouts of “Yeong-mi” came to represent the team’s dramatic rise and curling’s sudden surge in popularity in Korea.

As the lead, Kim Yeong-mi throws the first two stones for the team, alternating with the opponent’s lead.

“I rode on the bus during the PyeongChang Olympics,” explained Kim Yeong-mi during an interview with the JoongAng Ilbo last Monday. “The bus driver seemed really glad to see me and on the day the Korea-Japan match was held, the driver told me that he named his newly born daughter ‘Yeong-mi’ after me.”

In fact Kim Yeong-mi became so popular that even when she wears a mask, people can still recognize her by her eyebrows.

“Recently, people have been calling me the ‘nation’s Yeong-mi’ and I couldn’t be more honored to hear that,” Kim said.

Kim Yeong-mi was named by her grandfather. Her name combines the Chinese-derived Korean word yeong, meaning flower petals, and mi, which means beautiful. Together, the characters mean “beautiful flower.”

“Before, I wanted to change my name because it gives off an old feel,” said Kim. “I seriously considered changing my name to something that was completely Korean, such as ‘Cho-rong,’ or ‘A-reum.’ If that was the case, then Eun-jung would probably have shouted ‘Cho-rong, Cho-rong.’”

But the 27-year-old decided to keep her given name as people around her told her that “Cho-rong” didn’t suit her.

“They told me that ‘Yeong-mi’ suited me the best and advised me not to change my name,” explained Kim.

The curler’s name has garnered so much attention that businesses all over Korea have launched promotions giving discounts or freebies to people named “Yeong-mi.”

“My friends have been asking me to go [to a restaurant that gives free soju to anybody named “Yeong-mi”] with them, but I didn’t get the chance to go,” she explained. “But I’ve found that when I go to restaurants, some owners recognize me and give me a lot of free food as service.”

The team started curling as a hobby in 2006 when Korea’s first curling club was built in Uiseong.

Kim Yeong-mi first suggested to Kim Eun-jung that they start curling after school. Later, Kim Kyeong-ae, Kim Yeong-mi’s sister, joined the team after she visited the two at the curling center. Kim Seon-yeong was the last Uiseong-based member of Team Kim to join, when Kim Kyeong-ae wrote on a board in her classroom saying, “Anyone interested in curling?”

After the Olympics, Kim Yeong-mi and Kim Kyeong-ae bought an apartment for their mother with the money they won at different competitions, including the Winter Games.

Just like at the Olympics, the team has given up their phones at the women’s curling championship to avoid distractions.

“During major competitions,” explained Kim Yeong-mi, “I find it helpful not to look at a smartphone, to stay focused.”

Though Korea lost to Sweden 8-3 during the gold medal game in PyeongChang last month, it will have a chance to redeem itself as the two face off at 7 p.m. local time on Monday.