Korea Inc. should invest at home

Korea Inc. should invest at home 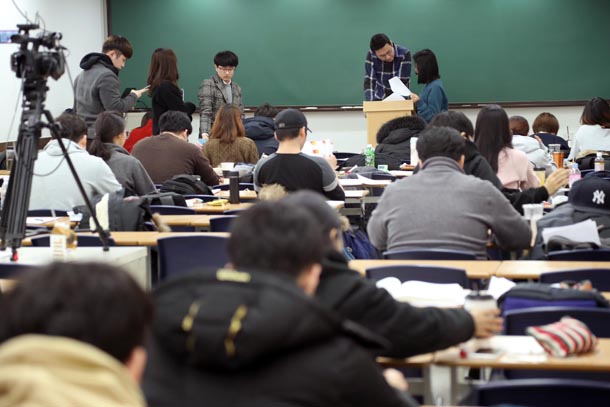 Job seekers study at a private academy for the civil service examination in southern Seoul over the Lunar New Year holiday. [YONHAP]

The government is right to urgently address youth unemployment. It diagnosed that, without emergency action, it could become a crisis. Lengthy unemployment takes a heavy toll on a nation. Without jobs, the young won’t get married nor have children. Unemployment causes across-the-board harm, from post-retirement costs and huge medical bills to public finance. Youth employment is a useful measurement of national competitiveness.

Countries around the world re working to combat youth joblessness, and are finding solutions.

Under what it calls emergency actions, the government will try to raise the real income for people under the age of 30 who take jobs in small and medium-sized companies by giving them more than 10 million won ($9,346) a year in subsidies and tax and loan incentives over the next three to four years. This would make new recruits earn about 6 million won more than their seniors who landed jobs at the same companies before the measures. Such an income gap could hurt the work environment in small workplaces.

What would happen when the state subsidy stops coming in? How would they cope without as much as 10 million won in income a year? If they leave, their employers would face a sudden labor shortage. Finding a replacement for workers who are familiar with their work after years of training will not be easy. The government will have to consider whether it should come up with another aid package. Korea’s job problem has not gotten any better, despite all the attention and spending by the government, because the government’s perspective is all wrong.

Jobs are created by companies. There is a limit to what the government can create. From 2010 to 2016, the country’s top seven biggest companies added 20,000 jobs at home, but 150,000 abroad. Overseas investment by Korea Inc. jumped 53 percent last year compared to 2013. When Korean companies give work to other nations, jobs at home become harder to find.

Countries that have successfully tackled youth unemployment have some similarities. They have deregulated markets and passed tax cuts to create business-friendly environments, regardless of who comes to power. They also offered incentives for companies to build production facilities that can generate jobs.

Good labor relationships are essential to keep jobs. In Japan and Germany, unions refrained from strikes and employers were active in hiring. In the United States, many unions have offered to cut benefits to keep factories from moving.

In late summer 2014, I interviewed Dale Jorgenson, a Harvard University professor. At the time, the U.S. Federal Reserve was ready to wind down the quantitative easing program as the U.S. economy showed signs of bottoming out.

He advised the Seoul government to carry out measures to make Korean companies invest at home instead of overseas to address worsening inequality and demographic woes. He said Japan’s decades-long stagnation started when Japanese companies moved their businesses overseas in the 1980s. He said that companies have the solution to generating productive investment and hiring.