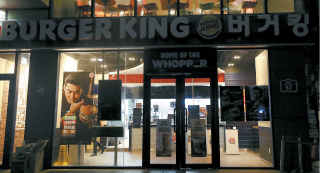 A worker at a Burger King restaurant in Jongno District, central Seoul, prepares to close the store Monday. The restaurant used to operate 24 hours a day, but last year its management decided to close its doors between midnight and 9 a.m. [YONHAP]

At lunch time on Saturday, a 46-year-old office worker surnamed Choi visited three restaurants in Yangjae-dong and Dogok-dong in southern Seoul with her husband only to find that all three were closed.

“We found a restaurant open on our fourth attempt, and the time then was past 2:30 p.m.,” she said.

Seoul used to be known as a city that never slept, with convenience stores, bars and restaurants that kept their doors open all throughout the day and night. There was once a time when it was harder to find restaurants closed on holidays instead of open. This is starting to change, however, as more businesses are choosing to close earlier at night or not open at all during holidays.

The main reason for this shift is the 16.4 percent minimum wage hike that went into effect this year and the recently passed bill that will reduce the maximum working hours per week to 52 from 68, which is expected to be put into effect in July.

Major companies such as Samsung Electronics and SK Hynix have already started reducing maximum working hours, and in July, the policy will be mandatory for businesses that employ more than 300 people. As this change goes into effect, it is expected that fewer people will have to look for meals near their office on weekends. With fewer working hours, people will return home earlier after work, and for restaurants, there will be fewer customers to justify keeping the lights on late at night for.

Shops and restaurants are already reacting to the shift, and they are reducing their operating hours in several ways. Some are simply closing earlier.

Discount chain Emart changed its closing hour from midnight to 11 p.m. starting this year. Homeplus is also introducing the same policy starting next month. From this month, bakery chain Paris Baguette will give a choice to its branch operators to choose between closing at 10 p.m. or the current time of 11 p.m.

The shift has even reached convenience stores, the industry where 24-hour schedules are perhaps the most established. Emart24, retail conglomerate Shinsegae’s convenience store chain, has given a choice to its branch operators on their operating hours since the brand launched in July. It is currently seeing a rapid decline in the rate of owners that choose 24-hour operation. It has decreased from 28.7 percent in August to 8.8 percent last month.

“Labor costs exceed earnings at nighttime, so it’s a more profitable choice to close down during these hours,” said Kye Sang-hyuk, head of the association of convenience store owners.

Some restaurants are giving up on lunch or dinner service. Baetnaduri, a renowned handmade tofu restaurant in Gyeyang District, Incheon, recently moved up its closing hour to 4 p.m. One restaurant specializing in marinated beef in Banpo-dong, southern Seoul, recently stopped serving lunch.

“In the past, we used to see office workers who came out to work on Sundays or holidays and the revenue was able to cover the labor costs, but now it’s hard to see any of them,” said a 59-year-old restaurant owner surnamed Park.

Another trend is to set the quiet hours between 3 and 6 p.m. as a break time.

“Break time was a thing for high-end restaurants that needed time to prepare the ingredients and clear up the store [before dinner time], but with the rise of the minimum wage, smaller local restaurants are adopting the system as a way to reduce labor costs,” said Lee Keun-jae, an executive at the Korea Foodservice Industry Association. “A majority of these restaurants pay the minimum wage set by law, so the 16.4 percent hike of 6,470 won [$6.04] to 7,530 won this year is a big burden.”

With restaurants cutting down on their business hours, part-timers are looking to pick up second jobs.

“The restaurant I work in adopted the break time system in the afternoon, so I’m looking for another place to work before the break time ends,” said a 26-year-old worker at a Japanese restaurant in Gangnam District, southern Seoul. “Even if I find another place to work, I feel the total wage I earn might be lower than what I used to make, considering the time and costs for moving between the two.”