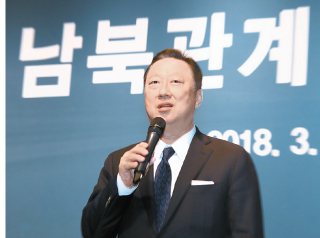 Park Yong-maan, chairman of the Korea Chamber of Commerce and Industry, speaks during a conference on inter-Korean relations on Monday at the organization’s office in central Seoul. [YONHAP]

Amid thawing inter-Korean relations, experts at a conference hosted by the Korea Chamber of Commerce and Industry (KCCI) praised the growing market economy in the North but offered mixed views on the geopolitical situation on the Korean Peninsula.

In the conference on Monday about the future of inter-Korean relations, hosted by the KCCI, five experts on North Korea discussed the issue in the presence of about 300 businessmen, including KCCI chairman Park Yong-maan.

The experts came to a consensus on the increased activity in the North’s market economy after Kim Jong-un took the helm in 2011, and were upbeat on the impact of global sanctions on the recalcitrant state.

“Rising elements of the market economy are being discovered within the North Korean economy after Kim Jong-un was inaugurated,” said Kim Young-hee, head of the North Korean economy team at the public Korea Development Bank. “The so-called May 30 measure [North Korea’s 2014 decision to begin Chinese-style reforms] endowed businesses with autonomy without the control of the central government, and the revision of the Enterprise Act in 2014 made it possible for not only the government, but also the new rich called donju, to invest in North Korean enterprises.”

However, the panelists differed on whether inter-Korean relations will improve in the near term. Lee Jung-chul, a professor of political science and international relations at Soongsil University, was optimistic, and said that the mood and situation on the Korean Peninsula is changing, adding that an “unprecedented opportunity” will unfold, given the North’s trust-building initiative.

On the other hand, Kim Byung-yeon, a professor of economics at Seoul National University, said there are still a number of hurdles to overcome for both Koreas, though he said it is fortunate for peace on the Korean Peninsula that the inter-Korean and North Korea-United States summits are set to take place.

“Given that the relationship with North Korea leaves a lot of room for variables and uncertainties, we need to take a prudent approach, minding the obstacles,” he said.