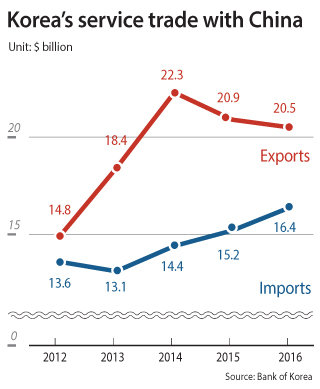 The Korea International Trade Association (KITA), one of the country’s major business lobbying groups, asked the Korean government to push China to give increased market access to Korean companies especially in the tourism, construction and entertainment sectors during upcoming free trade agreement negotiations.

The second phase of negotiations on the Korea-China FTA will take place on Thursday and Friday in Seoul with the aim of expanding the scope of the two countries’ free services trade.

While the bilateral trade pact has been in effect since December 2015, the original agreements were centered more on goods trade as the two sides had agreed to discuss services trade in a follow-up negotiation within two years. Though the original deadline has passed, they agreed to start negotiations during President Moon Jae-in’s visit to China at the end of last year.

According to KITA, the services markets in Korea and China offer very different levels of support to companies from the other country. Existing trade barriers in China have discouraged Korean firms from doing business there.

For instance, while Korean travel agencies operating in China cannot reach out to customers using outbound marketing tactics - where a company initiates the conversation and invites customers - Chinese agencies in Korea such as Ctrip and CITS are allowed to take that approach to expanding sales, according to KITA’s report.

The Chinese government has also made it more difficult for foreign entertainment companies including Korean game makers to earn the approvals necessary to offer services in China, KITA said.

“The two countries should fairly balance the services trade environments,” KITA noted. “While the bilateral FTA has technically opened up chances for Korean services providers such as companies in the construction, travel and games sectors, often they are blocked due to local regulations.”

The trade group also stressed that the government should establish protective measures for Korean companies during the negotiation so their businesses are no longer threatened by political issues like the deployment of the U.S. Terminal High Altitude Area Defense antimissile system in Korea.

According to a KITA survey of 286 companies investing in China, over 75 percent of the respondents said they were disadvantaged by the Thaad issue due to various forms of trade retaliation. The trade group suggested the two make it a must to consult with each other to find an agreeable resolution when issues that can negatively affect bilateral trade or investment arise.

While the number of Chinese visitors to Korea skyrocketed from 710,000 people in 2005 to 8.07 million in 2016, the number fell by 48.3 percent last year, reducing the number of visitors to 4.17 million people. The figure was heavily impacted by Thaad, according to data from the Korea Tourism Organization.