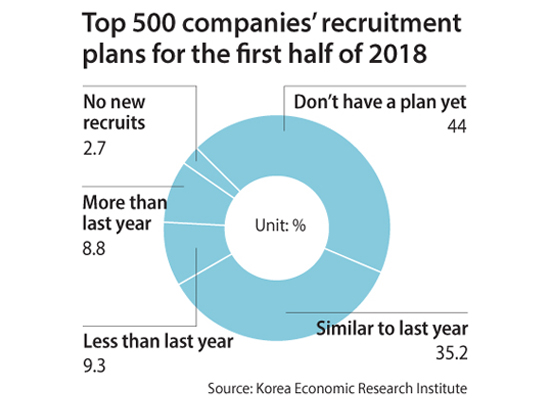 Of Korea’s top companies, 44 percent have not come up with a plan to hire new employees in the first half of this year, largely due to business troubles and uncertain market conditions, according to a report from the Korea Economic Research Institute on Monday.

The report was based on a month-long survey, beginning Feb. 7, of 182 of Korea’s top companies by revenue.

The reasons the companies said they were hesitant to hire more this year were mostly related to companies’ difficulties doing business, coupled with deteriorating market environments at home and abroad.

Male workers were preferred to female workers. The report said that only 28.6 percent of employees they planned to hire this year were women. At this time last year, 26.2 percent of the workers the companies expected to hire were women.

In a similar survey report released by Korean job-searching platform Job Korea on Monday, only 25 percent of the workers at top 100 companies in Korea by market capitalization were women as of the third quarter of last year.

As a percentage of female workers compared to the entire work force, Lotte Shopping topped the list, as 68.7 percent of its employees were women, followed by cosmetics giant AmorePacific with 68.6 percent and retailer Shinsegae at 67.8 percent.

Steelmakers, automakers and shipbuilders had the fewest female workers compared to their entire work force. At Korea’s second-largest steelmaker Hyundai Steel, only 2.7 percent of employees were women.