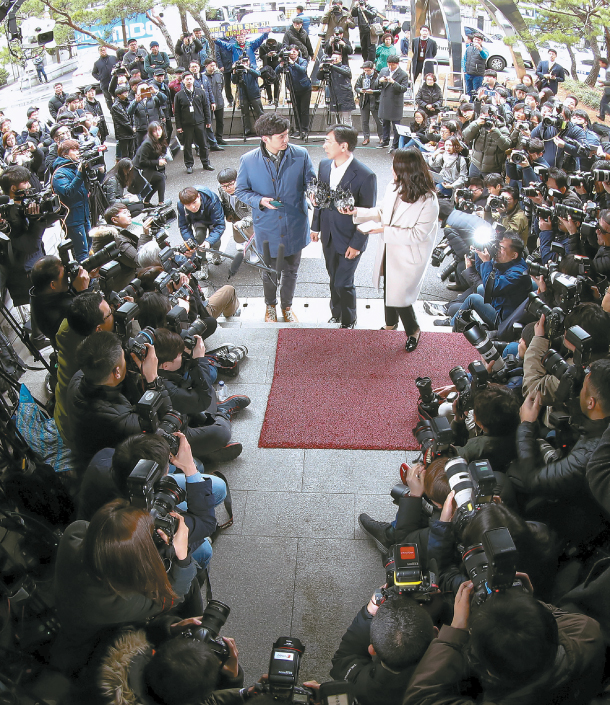 Former South Chungcheong Gov. An Hee-jung arrives at the Seoul Western District Prosecutors’ Office on Monday for a second round of questioning over allegations he raped his secretary and a worker at his political think tank. An denied the accusations against him. [YONHAP]

Former South Chungcheong Gov. An Hee-jung denied allegations that he raped his secretary and a worker at his political think tank as he arrived at the Seoul Western District Prosecutors’ Office for a second round of questioning Monday, claiming he thought the sexual relationships were consensual.

His comment is a reversal from an earlier acknowledgement that he forced his secretary, Kim Ji-eun, to have sex with him. Before Monday, An had accepted responsibility for raping Kim but made no mention of the second victim, who came forward after Kim appeared on local television to share her story.

“I thought our relationships were consensual,” said An, a former presidential candidate and the most prominent figure implicated in Korea’s swirling Me Too movement, “but the plaintiffs don’t think so. I apologize.”

An said he was cooperating in the prosecution’s investigation and would submit himself to any judicial action that follows. “I am sorry to everyone who has loved and supported me,” he said, “as well as my wife and family.”

An, 52 and married with two sons, arrived at the prosecutors’ office in a charcoal gray suit, a stark contrast to his first appearance on March 9 when he wore a dark-navy down coat and appeared more apologetic.

Prosecutors with knowledge of the investigation said officials at the South Chungcheong provincial government office were summoned as witnesses last week to provide information on An’s relationship with his secretary and the overall work environment there. Officials hope to verify whether the politician forced her into having sex within the context of a hierarchical workplace relationship. Both victims have filed a criminal complaint with the Seoul Western District Prosecutors’ Office, accusing An of raping and sexually harassing them on multiple occasions by abusing his authority.

The first victim, 33-year-old Kim, appeared on the primetime cable news show “JTBC Newsroom” on March 5. She told the anchor, Sohn Suk-hee, that she was raped by An four times and harassed often during eight months working in his office. The most recent rape, she said, occurred last month.

An’s office immediately denied the allegation, insisting the sex was consensual. Hours later, An wrote on his Facebook account that the denial was “wrong” and that “everything” was his fault. He stepped down as governor on March 6, and the Democratic Party expelled him.

The second victim claimed she was raped by An three times between August 2016 and January 2017 while working at the Institute for Better Democracy, An’s political think tank in Mapo District, western Seoul.