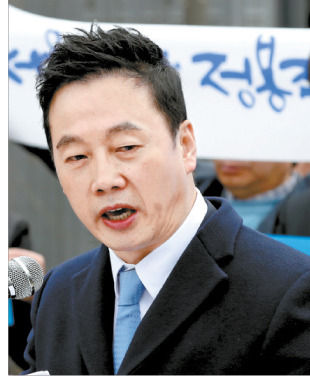 The Democratic Party refused to grant membership to a former lawmaker running for Seoul mayor on Monday, citing sexual misconduct allegations against him.

Chung Bong-ju, a representative who served from 2004 to 2008 under the predecessor of the Democratic Party, sought to regain membership for the mayoral race, but the party’s member credentials committee refused to reinstate him and the Supreme Council, the party’s top decision-making body, upheld it.

“It was a unanimous decision by the Supreme Council as Chung is embroiled in a Me Too accusation and the party should advocate the cause of Me Too,” Baek Hye-ryun, a spokeswoman for the Democratic Party, told reporters Monday.

Chung submitted his request for party membership on Feb. 7 hoping to run in the Democratic primary for the Seoul mayoral race. But on March 7, he abruptly canceled a news conference to announce his bid after a female reporter accused Chung of hugging and trying to kiss her in a hotel when she was a college student in 2011.

With Chung out, a three-way competition is shaping up in the Democratic Party. The winner will compete in the local elections on June 13. The primary will likely take place a month before, though an exact date has yet to be announced.

Rep. Park Young-sun, a former floor leader, announced her bid on Sunday to run in the party’s primary. She joins incumbent Mayor Park Won-soon, who has expressed interest in seeking a third term, and Rep. Woo Sang-ho, another former floor leader who declared his bid on March 11.

Representative Park last ran for mayor in 2011 but lost to Park Won-soon in the primary. Representative Woo was the first to throw his hat in the ring. Mayor Park, who leads in all opinion polls, is expected to make his bid public in mid-April.

The Democratic primary was initially shaping up to be a six-horse race, but Rep. Jeon Hyun-heui withdrew on March 8 after the party requested she remain in the National Assembly. To run for mayor, a lawmaker has to resign from the legislature.

Another contender, Rep. Min Byung-doo, bowed out earlier this month after he was accused of sexually assaulting a woman several years ago.