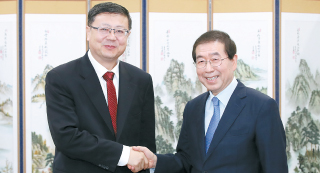 The city governments of Seoul and Beijing agreed Monday to designate liaison officers tasked with exchanging information on fine dust gripping the two capitals in what officials dubbed a “fine dust hotline.”

Seoul Mayor Park Won-soon and Beijing Mayor Chen Jining agreed to form a joint air quality research team to study ways to reduce fine dust as they held a biennial meeting of a cooperation committee between the two cities.

The two sides agreed to hold an air quality forum on a regular basis and alternately host an environment-related training program for city government officials. As part of the agreement, Seoul will host a workshop today on ways to reduce fine dust and volatile organic compounds, officials said.

Officials said it is the first time the two cities have signed a memorandum of understanding with such specific details on action plans, though the two sides have pledged to cooperate on environmental issues from a broad framework before.

“We’ve worked out ways of substantial cooperation in the air quality sector, which is an issue of common concern for the two cities and the most pressing issue to resolve,” Park said. “This will be an important turning point in municipal diplomacy for reducing fine dust.”