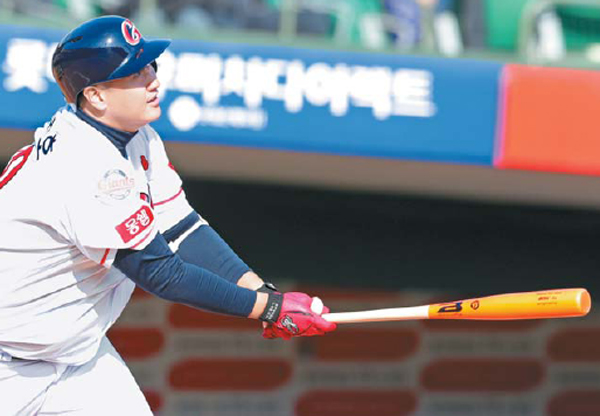 Despite high hopes for the upcoming season, the Lotte Giants, which came third in the 2017 season, ended up losing a preseason exhibition game 3-4 to the KT Wiz, which came last, on Sunday.

But the loss didn’t discourage the Giants’ captain Lee Dae-ho.

“When I think about how much time I have left as a professional athlete, I want to win even more,” said Lee after the match. “My dream is to win during my time with Lotte.”

The last time the Giants won the Korean Series was in 1992.

But with Lee back on the field, the team might just have a chance to redeem itself.

Lee, Lotte’s prodigal son, returned to the team last year after playing in Japan and the United States for five years.

“While I have the strength, I want to lead Lotte to victory,” explained Lee of his return.

Although the Giants haven’t picked up a trophy for decades, Lee does know a thing or two about winning.

During his time playing for Japan’s professional baseball league under the Fukuoka SoftBank Hawks, Lee’s team won the series twice in 2014 and 2015. Lee was even named MVP in 2015.

But despite spending 13 years of his 18-year career with the Giants, Lee has never seen the team win a trophy.

As the Giants ranked third in the regular season last year, they made it to the postseason for the first time in five years.

“The new athletes supported me and there are many talented rookies on the team,” Lee said. “I can’t wait for the start of the season. I have higher expectations for us than last year. If the older players play their part and the younger players put in their effort, I think we’ll have lots to smile about in the fall.”

The Giants are seen as possible contenders for the pennant for the upcoming season.

Though Kang Min-ho left the team to go to the Samsung Lions, the addition of Min Byung-hun and Lee Byung-kyu is expected to help carry the team to the postseason.

With pitchers Brooks Raley, Felix Doubront and Park Se-woong, the Giants seem to be set on the mound.

“If we win, I think I’m going to cry up a storm,” said Lee. “Even if the press releases a huge photo of me crying, I don’t care as long as we win. I would like to make a toast with the fans at the stadium.

“But since it’s impossible to pour drinks for 30,000 fans, I would pick one of the oldest fans and apologize for making him wait so long for a win as I pour him a drink,” joked Lee.

Though the season hasn’t even started, Lee is already suffering from a sore throat.

“I think I need to take care of my throat more than the other parts of my body,” said Lee. “My throat gets sore because I can’t help but cheer on my team on the bench. The captain has to cheer the most for the team to boost morale.”

At Sunday’s game, Lee was the designated hitter for the Giants and made one hit in three at bat.