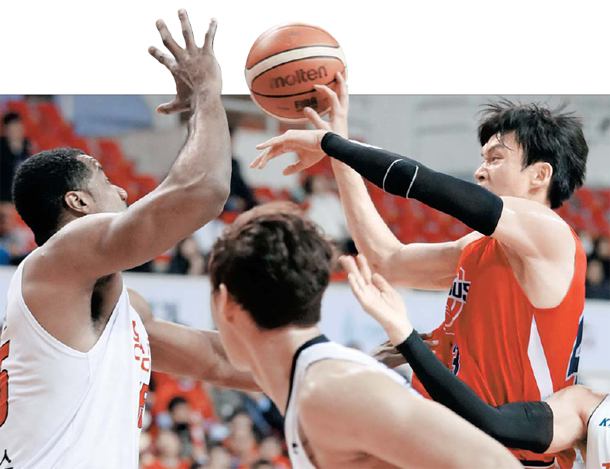 Forward Lee Dae-sung of the Ulsan Hyundai Mobis Phoebus, right, fights for the ball against the Anyang KGC during the second round of the playoffs on Monday. Mobis Phoebus won 98-77 in Ulsan. [YONHAP]

The Ulsan Hyundai Mobis Phoebus beat the Anyang KGC 98-77 with 12 three-pointers during the second round of playoffs in the Korean Basketball League on Monday.

It was a refreshing win for the team which lost 84-73 to KGC on Saturday.

“Dae-sung is a player who I can’t say anything [bad] about,” said the team’s head coach Yoo Jae-hak. “He’s always thinking about basketball. He has a perfect mindset for both training and during the games.”

By the second quarter however, KGC was only one point behind Mobis Phoebus with 45 points. The gap widened during the third quarter as Mobis Phoebus began to pull ahead, leading 71-59.

Still, it didn’t take long for KGC to catch up.

KGC’s Han Hee-won shot a three-pointer in the last quarter when guard Jeon Seong-hyeon passed the ball to him, bringing the score to 77-71.

But Mobis Phoebus’ forwards Yang Dong-geun and Reyshawn Terry were quick to score for their team. Yang made a three-pointer while Terry scored a two-pointer, bringing the team’s score up five points.

Terry also served as a vital member of the team, bringing 25 points with three assists.

At the first round of the playoffs, Mobis Phoebus only managed to make five three-pointers, but the team successfully redeemed itself with 12 during Monday’s game. KGC, on the other hand, scored seven three-pointers on Monday, though it was able to make 10 on Saturday.

It was a tough win for Mobis Phoebus as the team had to find a way around David Simon, one of the tallest players in the league standing 2.03 meters (6 feet 6 inches) tall, who coach Yoo said was Mobis Phoebus’ “biggest obstacle” after the match.

Starting next season, Mobis Phoebus won’t have to worry about facing Simon as the league has placed a height limit on foreign players.

Each team is currently allowed two foreign players, one bound by a height limit of 1.93 meters and the other unrestricted by any height regulations. Under the new regulations announced March 5, the limit for the two players will be set at 2 meters and 1.86 meters. As a result, Simon will no longer be able to play.

Mobis Phoebus ranks fourth while Anyang KGC ranks fifth. The two teams will play again on Tuesday at 7 p.m., this time in Anyang, Gyeonggi, for the third round of the playoffs.