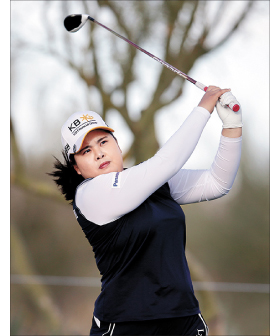 Korean LPGA star Park In-bee cracked the top 10 in the women’s world rankings after her latest victory on March 18.

Park jumped 10 spots to reach No. 9 in the rankings, which were released on Tuesday. She won the Bank of Hope Founders Cup in Phoenix for her first LPGA win in 12 months.

Park, a former world No. 1, cut her 2017 season short in September after a back injury while she was ranked No. 10 in the world, and by the end of October she was out of the top 10.

After winning in just her second tournament of the season, Park became one of six Korean women in the world’s top 10.

“I didn’t expect to win very early [in the season], I mean obviously, after a long break,” Park told the LPGA website. “In Singapore, I felt like my ball striking was quite good and I just needed to work on the putter a little bit. It has worked pretty good this week.”

Park got off to a great start with a birdie, and made a 1.5-meter (5-foot) putt on the first hole.

She extended her lead on the par-4 12th hole. When her second shot landed short of the green, she took out her putter and made a 6-meter birdie putt.

She continued her birdie streak over the next three holes to extend her lead further. On the 15th hole, a par-5, Park’s second shot hit the bunker short of the green. But she pulled off an impressive bunker shot to clinch her 19th career victory.

In the world rankings, Ryu So-yeon, No. 3, and Park Sung-hyun, No. 4, who shared the LPGA’s Player of the Year honors last year, remained the top two Koreans. Kim In-kyung slipped one place to No. 7, while Chun In-gee stayed put at No. 8. Korean LPGA star Choi Hye-jin dropped one spot to No. 10.

Feng Shanshan of China remained No. 1 for the 19th consecutive week.