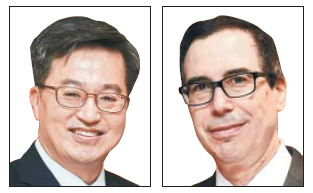 According to the Korean Finance Ministry, the two economic chiefs held a meeting in Buenos Aires on Monday on the sidelines of the G-20 Finance Ministers meeting and discussed a wide range of topics including the 25 percent steel tariffs that will go into effect at the end of this week.

Kim and Mnuchin agreed on the positive effect of the Winter Olympics on negotiations about North Korea’s nuclear threats, easing geopolitical risks on the Peninsula.

The two affirmed the importance of the alliance between South Korea and the U.S. especially at a time of new opportunities for dialogue with North Korea over denuclearization of the peninsula.

As close cooperation between South Korea and the United States is crucial at this point of time, Kim told Mnuchin that the higher steel tariffs imposed by the U.S. government will send the wrong signal on the relationship between the two countries. He argued South Korea should be excluded from the new tariffs.

He said instead South Korean steel and automotive companies have been increasing their investments and hiring in the United States, which has contributed to U.S. economic growth.

He also explained South Korea’s attempts to improve the transparency of its foreign exchange market.

The South Korean government on Friday announced that it is currently working with the International Monetary Fund (IMF) on the foreign exchange issue and it is looking into the possibility of disclosing details on the currency authorities’ intervention, known as smoothing operations, to stabilize the market and guard against extreme volatility.

Kim told Mnuchin that South Korea should be taken off a list of countries monitored for currency manipulation.

The U.S. government plans to release a list of currency manipulators next month.

Although China and South Korea were not listed as currency manipulators on the report released last October, it is still on the U.S. monitoring list.

Mnuchin said although it is difficult to predict since the Treasury report is still in the making, he said he understood the South Korean position on the issue.

The Finance Ministry said the meeting of the two chief economic policymakers was an opportunity to reaffirm the cooperative relationship between the two countries on economics and finance as well as the security alliance.