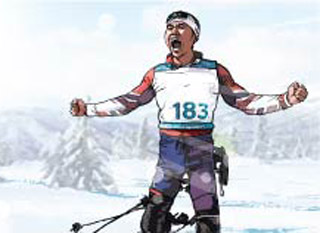 The 36 Korean athletes who participated in the PyeongChang Paralympics, which ended on Sunday, created scenes just as impressive as those at the Olympic Games.

Shin Eui-hyun, who lost his legs in a traffic accident 12 years ago, won Korea’s first-ever Paralympic gold medal, and the Korean ice hockey team won a bronze medal. Korea finished the Paralympics in 16th place, its best-ever ranking, with one gold and two bronze medals.

The Paralympics garnered unprecedented national attention. The hockey games drew an average of 5,000 spectators, and the 35,000 seats at the opening and closing ceremonies sold out. Koreans signed a Blue House petition requesting that the Paralympic games be covered live. The Korean Paralympic Committee Chairman Lee Myung-ho said he hopes that people with impairments get courage from watching the athletes and that he hopes others can develop a deeper understanding of people with impairments.

With the successful hosting of the Paralympics, are sports for the impaired going in the right direction? It’s hard to say. Just like Olympians, the medalists are elite athletes. Shin is a member of the Nordic ski team for Changsung Construction and Engineering, while 13 of the 17 ice hockey team members play for the Gangwon Provincial Office. They won medals because they could focus on training.

For para-sports to be competitive, daily sports and physical activities need to be emphasized. Currently, only 20 percent of people with impairments participate in sports and physical activities compared to 60 percent of able-bodied people. As sports are not widely promoted, it is difficult to get young athletes into the sports. For instance, 38.9 percent, or 14, of the athletes representing Korea in the Paralympics were between 40 and 60.

The solution is simple. Accessible facilities for those with impairments should be expanded, and they should be open to the general population. For example, people without impairments can use the Icheon Training Center, where Paralympic athletes train.

“Team Kim,” the Korean women’s curling team that won a silver medal in the PyeongChang Olympics, trained at the same curling center that the Paralympic team used. The Gwangju Sports Center for the Disabled, which opened in 2015, is not restricted to those with impairments.

The Minister of Culture, Sports and Tourism Do Jong-hwan promised that sports facilities accessible to people with impairments will expand to more cities and districts. If his promise is kept, Korea will eventually have more athletes like Shin Eui-hyun.