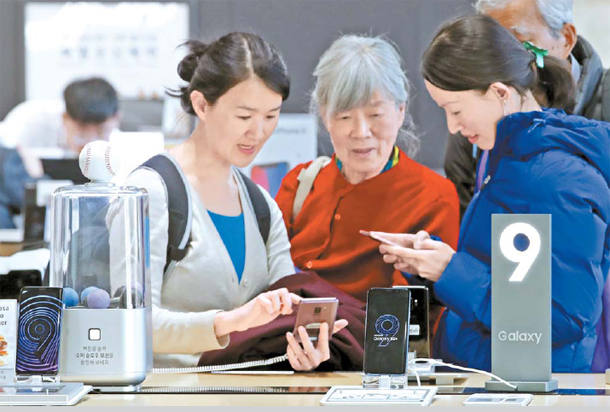 Customers take a look at Samsung’s Galaxy S9 at the KT Square in central Seoul on March 16, when the new smartphone was released worldwide. The model faces lukewarm reception along with tough competition from cheaper high-end refurbished smartphones, which are rising in popularity. [YONHAP]

Mr. Jin was recently in the market for a new smartphone, but this year’s brand-new models were too expensive for him. So he headed to an electronics store in Yongsan District, central Seoul, and snagged a good deal on a used high-end phone.

The latest smartphones from major manufacturers like Samsung and Apple can carry price tags of more than 1 million won ($935), even after taking subsidies from carriers into account.

“I initially thought about buying a reasonably priced medium- to low-range smartphones, but the clerk at the store recommended a refurbished premium model,” Jin said. “It looked O.K. and the price was no different than a new, medium-range smartphone.”

With the recent increase in smartphone prices, an increasing number of consumers are turning to refurbished premium phones that boast cheaper prices.

Unsatisfied customers often return their phones to retailers or manufacturers because of faults with the device. Secondhand phone dealers fix the phones, if they’re faulty, and then resell them at lower prices.

A 64-gigabyte Apple iPhone X, for instance, costs 1,367,000 won when bought new. Many customers aren’t inclined to spend that much money on models such as the X and Samsung’s similarly priced Galaxy S9 because the models aren’t equipped with impressive features that justify the increased prices.

Many experts are saying that premiums phones’ features have hit the point of diminishing returns. The S9 was released last week to sales that fell short of previous Galaxy models, mostly because its features are not dramatically different from its predecessors.

Wireless carriers are also reducing their monthly phone bills, contributing to the recent trend. Carriers raised the ceiling for the maximum monthly discount on phone bills to 25 percent from 20 percent in September of last year. Customers in Korea are generally offered the choice of a discount on a new phone or on their monthly bill when they sign a contract with SK Telecom, KT or LG U+, the three major carriers.

“The rise in consumers choosing to buy used smartphones is a global trend,” said Park Jong-il, CEO of Good Mobile, a secondhand smartphone retailer. “Used phone prices have been stabilized after sellers listed the price over the internet.”

ICD, another market researcher, predicts that annual sales of refurbished phones will increase to as much as 220 million by 2020.

The growth in the used phone market isn’t good news for smartphone producers, who have seen sales slide in recent years. According to IDC, manufacturers shipped 435 million smartphones in the fourth quarter of last year, down 6.3 from the same period in 2016. Annual shipments also dipped 0.5 percent last year compared to 2016 in the first decrease since IDC began tracking them.

Smartphone manufacturers are taking action to keep up with the shifts in the market. Koh Dong-jin, CEO of the mobile division at Samsung, told reporters recently that the company is considering changing its offerings in reaction to the growth of the refurbished phone market. Samsung launched a system with the Galaxy S9 that gave discounts to buyers of the phone who traded them in for either Samsung or Apple phones. The newer the model traded in, the bigger the discount the buyer received.

Apple has long maintained its iPhone upgrade program, in which new phone buyers get discounts in return for returning old phones. The used phones are then resold, mostly in India and Africa.