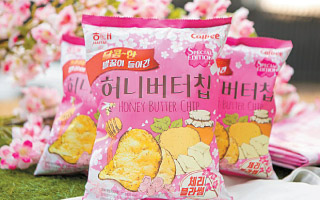 The product is a limited edition for the spring season, with only 1.4 million packs available, to be distributed between March and April. This version has pink packaging decorated with cherry blossoms instead of its iconic gold.

And it’s not only the outside that’s changed: The product contains powder made from cherry blossom flowers picked from Chilgok County, North Gyeongsang. Online reviews from consumers reveal that the special edition has a flowery scent to it.

Honey Butter Chip created a sensation upon its release in 2014. The product was such a huge success that stores frequently ran out during the first few months after its release.