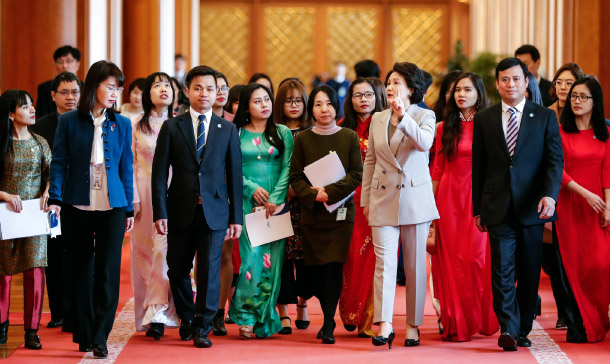 First lady Kim Jung-sook, second from right at front, guides Vietnamese students studying in Korea who were invited to a luncheon in the Blue House on Tuesday before President Moon Jae-in leaves on a trip to Vietnam on Thursday. [YONHAP]

President Moon Jae-in will leave for Vietnam and the United Arab Emirates (UAE) this week to improve Korea’s economic cooperative ties with major markets in Southeast Asia and the Middle East.

The Blue House announced Tuesday the schedule for Moon’s seven-day visit to Vietnam and the UAE from Thursday through next Wednesday. Moon will arrive in Hanoi on Thursday and begin his trip with a meeting with Park Hang-seo, former South Korean football manager and current head coach of Vietnam’s national football team.

Later in the day, Moon will attend a groundbreaking ceremony for the Korea-Vietnam Institute of Science and Technology and meet with Korean residents in the country.

On Friday, Moon will begin his day with a visit to the Ho Chi Minh Mausoleum. An official welcome ceremony and a summit with Vietnamese President Tran Dai Quang will follow. Moon is also scheduled to meet with other leaders of the country.

Moon will attend a series of economic events including a job fair and the Korea-Vietnam Business Forum. At the fair, Vietnamese businessmen will make promises to hire one Korean youth per company to help the youth unemployment problem in Korea.

On Saturday, Moon will have a breakfast at a restaurant frequented by the Vietnamese public. Moon did a similar activity when he visited China last December as a form of public diplomacy.

Moon will leave for the UAE later in the day and visit the Sheikh Zayed Grand Mosque in Abu Dhabi to pay his respects at the grave of the country’s first president, Zayed bin Sultan Al Nahyan. Zayed led the formation of UAE and ruled the country for almost 40 years. On Sunday, Moon will lay flowers at a veterans’ memorial and attend a welcome ceremony. A summit with Sheikh Mohammed bin Zayed Al Nahyan, the crown prince of Abu Dhabi, will take place later in the day along with a signing ceremony of bilateral memorandums of understanding.

“Our goal is to elevate the current strategic partnership with the UAE to a special strategic partnership,” a senior presidential aide said. “We want to establish a cooperative relationship in the UAE’s future infrastructure development, going beyond the nuclear power plant project.”

Moon will attend a luncheon to be hosted by the crown prince and meet with Korean residents over a dinner.

About 15 Korean businessmen will join the luncheon. “Because the UAE is a monarchy, it is incredibly important to connect them with the royal family and inner circle,” the source said. “Moon will be accompanied by many Korean businessmen to offer them that opportunity.”

On Monday, Moon and the crown prince will travel to the construction site of the Barakah nuclear power plant to mark the completion of the first reactor. Korea won a contract for the project in 2009. Moon will visit Korean troops dispatched in the UAE. He will later move to Dubai and meet its ruler, UAE Prime Minister Mohammed bin Rashid Al Maktoum. Moon will also give a speech at the Korea-UAE Business Forum to wrap up his trip.