Moon discloses his changes to the Constitution

Moon discloses his changes to the Constitution 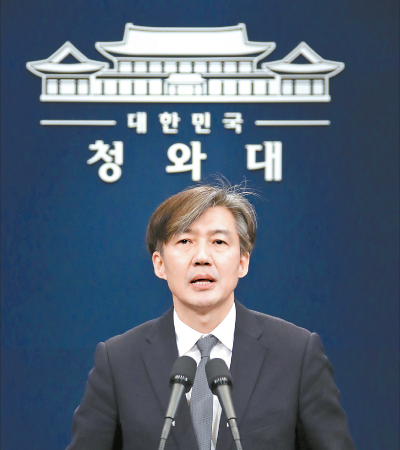 Cho Kuk, senior presidential secretary for civil affairs, talks to the press in the Blue House on Tuesday. [YONHAP]

The Blue House on Monday made public a part of President Moon Jae-in’s bill to amend the Constitution, aimed at expanding basic rights of the people and deepening Korea’s democracy.

“The upcoming constitutional amendments must be centered on the people,” Cho Kuk, senior presidential secretary for civil affairs, said in a media conference outlining Moon’s proposals. “The amendments must expand basic rights to guarantee freedom, safety and quality of life to the people and broaden the people’s rights such as expansion of direct democracy.”

Moon has vowed to submit his constitutional amendment bill to the National Assembly next Monday, based on a timeline to hold a national referendum along with local elections on June 13. The Blue House promised to disclose details of the bill over three days starting Tuesday.

Before announcing proposed changes in the Constitution’s preamble and basic rights, Cho explained why Moon is pushing forward the amendments. “Thirty years have passed since the Constitution was changed through the June 1987 democratic uprising,” Cho said. “Since then, the lives of the people changed a lot as they went through the [1997] foreign exchange crisis and the Sewol ferry’s sinking [in 2014], and the people’s call for a new Republic of Korea grew further since the candlelight protests and the presidential impeachment [of 2017].”

According to Cho, Moon proposed to change the preamble of the Constitution to include historic events that are seen as landmarks in Korea’s democratization. While the current preamble only marks the significance of the uprising of April 19, 1960, the proposed bill will include the democratic protests in Busan and Masan in 1979, the May 18 democratic movement in 1980 and June protests in 1987. Cho said the events are all recognized by the law as democracy movements.

According to the Blue House’s press release, the “candlelight revolution” in 2016 and 2017 that led to impeachment of Moon’s predecessor Park Geun-hye will not be included in the preamble because it is still ongoing.

Another key aspect of the amendments is Moon’s desire to strengthen basic rights of the people.

Because Korea now has a population of 2 million foreigners and because the international community’s expectations of the country’s human rights have risen, Moon seeks to promote basic rights of “all people of the country” instead of “the country’s citizens.”

Social rights such as freedom of occupation, guarantee of properties, education rights and social security rights and rights concerning the public economy and national security are still given only to citizens.

The bill also seeks to reinforce rights of laborers. The state is assigned the duty to ensure equality of wages. The state is also required to implement policies for job stability and work-life balance.

According to the proposed revision, public servants are also granted basic labor rights - to organize, bargain collectively and to strike - with the exception of active-duty soldiers.

The bill will also introduce the basic right to information in order to better deal with changes in the era of the so-called fourth industrial revolution. Moon’s bill removed a clause from the Constitution that the prosecution has the exclusive authority to seek warrants. The prosecution, however, will maintain that right exclusively because the current Criminal Litigation Act remains unchanged.

One of the key elements in the proposed revision is Moon’s plan to bolster direct democracy. Cho said the people’s demands are strong for recall elections of lawmakers and a system for the public to propose and submit bills to the legislature.

“Although corruption by a lawmaker can be made clear, he or she holds no responsibility until a court conviction takes away the seat,” Cho said. “And about 6 million people participated in a petition for a special law on the Sewol ferry’s sinking, but the government [of Park] and the National Assembly did not respond.”

Cho said the Moon administration decided to introduce a system for recall elections of lawmakers and a system to allow the public submission of bills because the public showed its desire to monitor the government and participate in the legislative process through the candlelight vigils and its enthusiastic participation in the Blue House’s petition board.

“By expanding direct democracy, we will be able to supplement the system of representative democracy and contribute to advancement of democracy,” Cho said.

He also threatened that any LKP lawmakers who participate in such a vote will be kicked out of the party. “We won’t set a foot in the voting session,” Hong said. “Anyone who does will be expelled.”

Hong also said Moon’s initiative is a dirty trick aimed at the local elections because he will hold the LKP accountable for a failed passage. To hold the national referendum, the bill must be passed by the National Assembly by more than two thirds of the incumbent lawmakers, and the ruling party only has 41.3 percent of the legislature.

Hong also criticized Moon’s attempt to change the Constitution’s preamble. “This is not a constitution. It is a piece of rag,” he said.