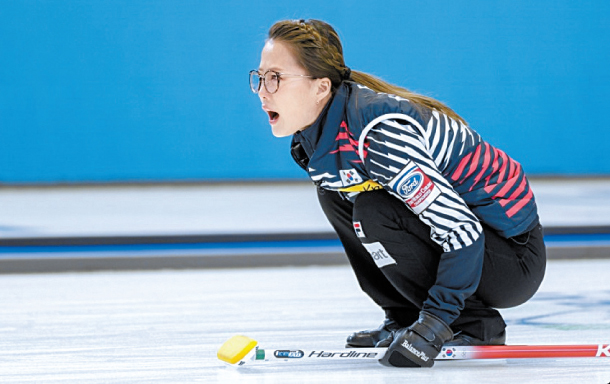 Skip Kim Eun-jung shouts to her team during a round robin game against Sweden on Monday. [YONHAP]

The Korean women’s curling team had an easy win against China 12-3 during the round robin stage of the Ford World Women’s Curling Championship 2018 in North Bay, Canada, on Tuesday.

Despite China having the hammer in the second, Korea stole three points, bringing the score to 8-0. A point from China in the third end and two in the fourth were not enough to stop Team Kim’s momentum.

Korea took two points in the fifth end and two in the sixth, proving so dominant that China conceded. In curling, a team is not allowed to concede before the sixth end.

Team Kim also had a tense match against Italy earlier in the day. Korea won by one point against Italy, with the final score at 8-7.

Though Korea took the lead with 2 points in the first end, Italy returned with a point in the second, tightening up the score. Team Kim quickly scored three points to make the score 5-1 by the third end.

The game quietened down for Korea after the third end, with Italy slowly pulling their way up the scoreboard. By the tenth end, the two teams were tied 7-7, and the game went into a tie-breaker end.

Korea made one point in the tie-breaker to win the game.

The dynamic Team Kim won the adoration of fans across the country and around the world after they unexpectedly swept through the curling contest at the PyeongChang Olympics with steely determination and impeccable teamwork, ultimately winning the silver medal.

The team’s success brought them instant fame in Korea, a country where curling was virtually unknown two months ago. The popularity has continued after the Olympics, with companies lining up to offer sponsorship deals and fans following the team’s every movement.

Kim Eun-jung’s emphatic shouts of “Yeong-mi” - the team’s lead - have become a globally recognizable catchphrase and the skip’s hairstyle has also started to take off, with children across Korea opting for her signature front plait with ponytail.

Team Kim is currently ranked third with four wins and one loss, behind Sweden and Canada, both of which have yet to lose a game.

Though Korean curling fans hoped for the team to beat Sweden on Monday in a highly-anticipated rematch of the gold medal clash from the 2018 PyeongChang Winter Olympics, it wasn’t to be. Korea lost 7-9 to Sweden, their only loss so far in the competition.