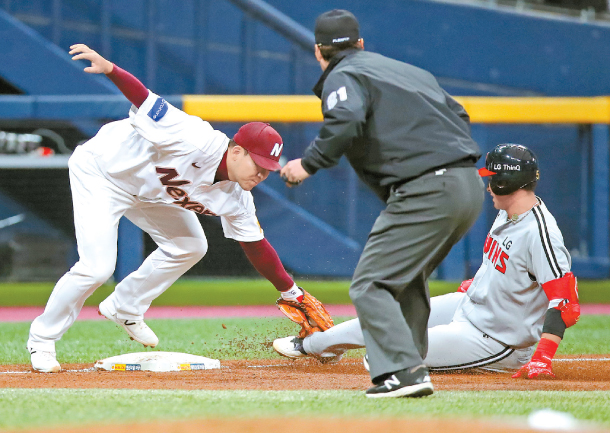 Nexen manager Jang Jung-suk announced last weekend that the team’s final two preseason games, on Tuesday and Wednesday, would be opportunities to test his relievers. With his five-man rotation set and hard-throwing right-hander Cho Sang-woo installed as the closer, Jang wanted to figure out which of his relievers would best fit into middle relief roles.

KBO teams are in the midst of the shortest preseason ever. Only eight games were scheduled and one of them got rained out last week, leaving managers to scramble to give their pitchers as much work as possible before the start of the regular season on Saturday.’

It’s the earliest start to a season in the league’s 36-year history. This was forced by a midseason break, starting in mid-August to accommodate the Asian Games, where South Korea, as the defending baseball champion, will be sending a team of KBO All-Stars.

Against this backdrop, Jang used seven relief pitchers when they hosted the LG Twins at Gocheok Sky Dome in Seoul on Tuesday. The Heroes lost the game 5-3, with their final pitcher, right-hander Cho Deok-gil, serving up a go-ahead two-run home run in the top of the ninth inning.

Right-hander Ha Yeong-min started the game for the Heroes, and he responded with three scoreless innings. He walked one and struck out one, and needed just 26 pitches in an efficient outing.

The Heroes gave him a two-run cushion in the first inning, thanks to an RBI groundout by Park Byung-ho and a run-scoring single by Kim Ha-seong.

Left-hander Son Dong-wook relieved Ha to begin the fourth inning, and he promptly gave up an RBI double to Adonis Garcia.

The Heroes got one back on Ko Jong-wook’s solo blast in the bottom fourth, but their bullpen failed to hold on to the 3-1 lead.

In the top of the fifth, right-hander Yoon Young-sam allowed an RBI double to Kang Seung-ho. Lefty Oh Ju-won took over the game in the sixth for the Heroes, and Garcia greeted him with a game-tying single.

The Heroes squandered a two-out opportunity in the bottom sixth, when Seo Geon-chang struck out with men at first and second.

Two righties, Kim Dong-jun and Lee Bo-geun, kept the game tied through seventh and eighth innings. Lee, a 31-year-old workhorse over the past two seasons, has now thrown 2 2/3 scoreless innings in the preseason and looks to have secured a spot in the pen.

But Cho Deok-gil didn’t help himself in the battle for a bullpen job, as Chae Eun-seong took him over the left field for the tie-breaking two-run homer with two outs in the ninth inning.

The Heroes’ bats also went quiet after Ko’s solo shot in the fourth, as they managed just two singles the rest of the game.

The team ERA should improve with a solid starting five, led by Esmil Rogers and Jake Brigham, though they don’t have a left-hander in the rotation. Any lineup that includes Park Byung-ho, a two-time MVP and a four-time home run king back from a stint with the Minnesota Twins, is a threat to put big numbers on the board.

But middle relief remained a concern on Tuesday. The Heroes have now allowed 11 home runs this spring, tied with the Hanwha Eagles for most in the preseason. They are second to last with a 6.18 ERA, a number inflated by their shoddy relief corps.