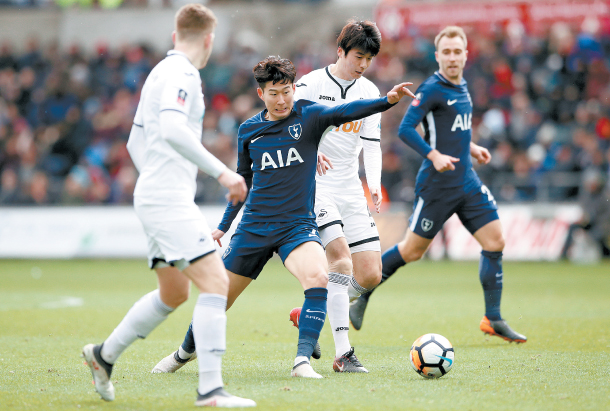 Tottenham Hotspur's Son Heung-min, second from left, and Swansea City's Ki Sung-yueng, to Son's right, battle for the ball during a match at Liberty Stadium in Swansea, Britain, on Saturday. [AP/ILGAN SPORTS]

Son Heung-min of Tottenham Hotspur is the highest-scoring Asian player in English Premier League history, and his club wants to sign a 5.2 million pound ($7.3 million) contract extension with him until 2020. But the 25-year-old player still hasn’t completed his mandatory military service, which could jeopardize Son’s chances of renewing his contract.

Korean men must fulfill their 21-month military service by age 27, with few exceptions.

Son is currently signed with the Spurs under a 3.1 million-pound contract, but with his overall performance this season, the club is considering renewing his contract, which will expire after this season. But if Son renews his contract with the team, he must play until 2020.

Son rose to fame after his winning goal against Crystal Palace in November last year. Throughout the season, Son has scored 12 goals in total in the Premier League, two goals at England’s Football Association Challenge Cup, and four in the Union of European Football Associations Champions League.

He also won the Asian Football Confederation’s International Player of the Year award for a second time, having first won it in 2015, and was named the Top South Korean Male Footballer of 2017 at the Korea Football Association awards.

Born in Chuncheon, Gangwon, Son rose to prominence at Bayer Leverkusen in Germany, making 87 appearances and scoring 29 times before joining the Spurs in 2015.

As an athlete, Son can be enlisted for supplemental service, which states that he is capable of serving on active duty as a result of his physical examination, but isn’t required to. He can instead do social work for the military, according to the Military Service Act. Still, Son must serve for a full 21 months before he turns 27.

Though he can play football until July 2019, if he wants to avoid serving for 21 months, Son must join the Korean team for the 2018 Asian Games Jakarta-Palembang, which are being held this August.

Athletes who win a medal at the Olympic Games or a gold medal in the Asian Games are granted exemptions from mandatory military service and are only required to do four weeks of basic military training and must play their sports for the next 34 months. They are also obligated to attend a few days of annual military training for the next six years.

Some Koreans are taking to the Blue House petition page, arguing that Son’s outstanding performance at the Premier League should grant him an exemption or postponement from serving the military, as he is enhancing the “national prestige in the field of sports.” Others are requesting a change to the military service act so that it can take into consideration Korean-born athletes playing on teams overseas.

In a public poll on RealMeter, 75.2 percent out of the 12,111 respondents, all aged 19, responded that Son should receive a deferment or exemption from serving the military, while 20.6 percent opposed it.

Son is currently looking into qualifying for the Korean national team for the upcoming Asian Games, according to Spurs.