For Rhee Seundja, home was in her art

For Rhee Seundja, home was in her art

The myth of the tortured artist is a cliched one, but for Rhee Seundja (1918-2009), part of the first generation of Korean abstract artists active in Paris and one of few Korean women in the art world at the time, pain had a way of following her and shaping her work.

If Rhee had not experienced her three young children being taken away from her by a divorce in the extremely patriarchal society of 1950s Korea, in the midst of the Korean War, if she had not left her home country for Paris for a breakthrough in life, the Korean art world might have lost an important modern figure.

A large retrospective of the artist’s work opens today at the National Museum of Modern and Contemporary Art (MMCA) in Gwacheon, Gyeonggi. “Rhee Seundja: Road to the Antipodes” coincides with what would be the artist’s 100th birthday and features 127 pieces, most of them large oil and acrylic paintings. Among the others are ceramics, woodblock prints and the blocks used to make them, which the artist regarded as separate pieces.

1. Wooden blocks by Rhee Seundja for prints on display as sculptures at her retrospective in the MMCA Gwacheon. 2. Rhee’s 1962 painting “A Mother I Remember.” [MMCA, MOON SO-YOUNG]

The paintings in the early 1960s, categorized by the artist herself as “Woman and the Earth” paintings, reflect her nostalgia for the motherland and longing for her own mother and her three children, said Park Mi-hwa, a curator at the museum.

But the paintings, with thick textures and full of geometric motifs that remind of ancient East Asian characters, are neither sorrowful nor melancholy. The paintings, which “the artist painted as if she farmed the land,” according to the curator, show life, warmth and the magnificence of Mother Earth.

Rhee was quoted by the museum as saying that she put the geometric “symbols” to bring life and Eastern philosophy into the materialistic world of Western art, denying that her art comes only from personal emotions.

Her work attracted the attention of French art critic and journalist Georges Boudaille, who wrote an introduction to her solo show in 1962. At the Ecole de Paris exhibition, she presented “A Mother I Remember” and put up solo shows in prominent French galleries such as Lara Vincy and Charpentier.

“Although she started art relatively late at the age of 35, she emerged as a successful artist in a relatively short time,” Park said. “She was a prolific artist - 1,300 paintings, 12,000 prints and 500 pieces of ceramic through her career of six decades.” 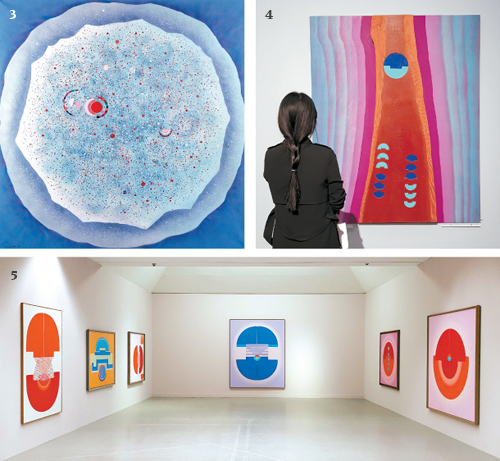 “When she visited Korea as a successful artist for a solo show in 1965 for the first time since she left, she finally met her three children. All of them were already men in their 20s,” the curator said. “But she was not the kind of mom who would cry and say, ‘I’m so sorry for not having stayed with you.’ She was upright and dignified. Her sons were impressed by her attitude and her work.”

Her third son, a businessman and head of the Seundja Rhee Foundation, said in an interview with the JoongAng Ilbo in 2012, “She was a heroic artist and I admire her.”

After Rhee finally met her sons in 1965 and after her own mother died in 1968, she stepped away from “Woman and the Earth.” In the 1970s, she focused on a series of geometric abstract paintings she called “Yin and Yang.”

The paintings on view, with brighter colors and lighter textures, combine her philosophy of yin and yang with aerial views of cities layered with buildings, an image she got interested in after traveling to the United States.

The last part of the exhibition features Rhee’s cosmic paintings that she called “Road to the Antipodes.” In the paintings, she depicts nature, universe and poles that she looked down at from the airplane going back and forth between Korea and France, the two antipodes in her life.

“She developed passion for art and constructed her oeuvre outside the dominant mainstream trend of modern art at that time,” Bartomeu Mari, director of the MMCA, said. “She created the new artistic world through the harmony of opposites, including yin and yang, the East and the West, nature and machine, and life and death.”