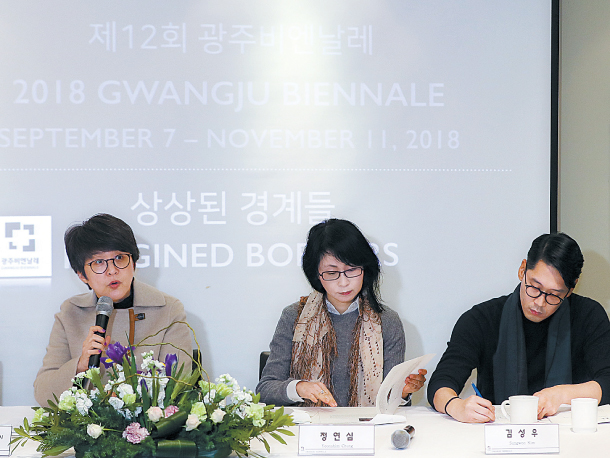 From left, Gwangju Biennale Foundation President Sunjung Kim and two of 11 curators for the 2018 edition, Chung Yeon-shim and Kim Sung-woo, attend the press briefing in central Seoul on Wednesday to unveil the participating artists. [YONHAP]


The organizers of the 2018 Gwangju Biennale, Asia’s leading art event, unveiled Wednesday the list of participating artists and the details of the planned exhibitions.

This year’s theme is “Imagined Borders,” a reference to the 1995 inaugural edition’s theme “Beyond the Borders” as well as to political scientist Benedict Anderson’s term “Imagined Communities.” This year’s theme is about the ironic phenomena of new borders being created or hardened not only between nations, but also between generations, genders, economic classes and others in everyday life despite the spread of globalism.

“We focus on artists in border areas such as diaspora artists and those in Asia, Latin America and Middle East, who are outside the West-centered art discussions,” said Sunjung Kim, president of the Gwangju Biennale Foundation, at a press briefing held at a restaurant in central Seoul.

Under the multiple curator system introduced by Kim for this year’s biennale, 11 curators on seven teams will create seven exhibitions.

The exhibitions will take place across both the traditional venue of the Gwangju Biennale Exhibition Hall and the new Asia Culture Center (ACC).

“The seven exhibitions are being planned nearly independently from each other but we also adjust plans through discussions with other exhibitions’ curators,” Chung Yeon-shim, art historian and one of the 11 curators, said at the press meeting.

“And an exhibition about the Gwangju Biennale archive, now planned by curator David Teh [a Singaporean art critic] will help connect the dots between the seven exhibitions,” she added.

This year’s biennale has introduced two new features - site-specific commissioned works to express the longing for democracy by Gwangju citizens, which culminated in the massive anti-government protest in 1980, and the Pavilion Project in which three prestigious art institutions - Palais de Tokyo, Helsinki International Artist Programme and Philippine Contemporary Art Network - hold exhibitions in the city on the sidelines of the biennale.