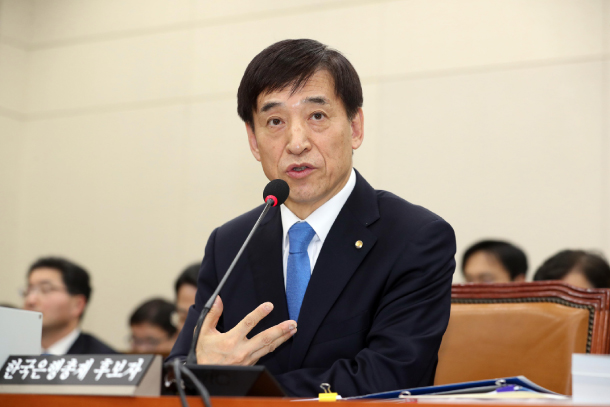 Bank of Korea Gov. Lee Ju-yeol participates in a question and answer session at the National Assembly hearing held Wednesday on extending his term. [YONHAP]

If the economy stays the course, Korea’s central bank should raise its key interest rate, the bank’s governor said on Wednesday.

Bank of Korea (BOK) Gov. Lee Ju-yeol told lawmakers that keeping the key interest rate at its current level will have a similar effect as lowering it.

“Even if we raise the interest rates in two accounts, it would not be tightening monetary policy, as the current interest level is quite low,” Lee said.

The BOK governor was being interviewed by lawmakers as he seeks a second term.

He is the first governor in 40 years to extend his term.

Lee said that considering Korea’s falling potential for growth, given its low birthrate and aging population, it would be difficult to raise the key interest rate to levels prior to the 2008 global crisis, when it was between 5 and 5.25 percent.

The interest rate has been lowered since October 2008, a month after global markets went into turmoil with the bankruptcy of Lehman Brothers.

“Compared to the past, the management of the key interest rate in order to adjust the economy could be significantly narrowed,” Lee said.

The governor said that the BOK is closely monitoring the flow of capital investment, as interest rates are expected to rise in the United States.

The U.S. Federal Reserve was expected to release a statement on its first meeting under new Chairman Jerome Powell at 2:30 p.m. yesterday.

“We will be looking closely at the capital flow in international financial markets tomorrow,” Lee said.

If the U.S. interest rate is raised between 1.5 percent and 1.75 percent, it will be the first time in 10 years and seven months that the U.S. borrowing rate will be higher than Korea’s.

The BOK is scheduled to hold a meeting led by the governor today.

Lee also told lawmakers that the possibility of Korea being labeled a currency manipulator is low.

“We are currently active in negotiations with the United States and thus the possibility of being named a currency manipulator is low,” Lee said.

The Korean government said last week that in the interest of transparency, it is considering disclosing the details of financial authorities’ interventions in foreign exchange markets to ease volatility.

Korea is currently on the U.S. Treasury’s monitoring list for currency manipulation. The Treasury will release an update to the list next month.