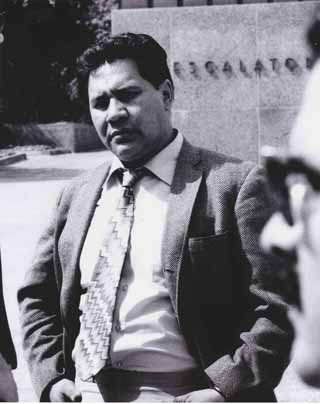 Oscar Zeta Acosta, a volatile Mexican-American writer who was the inspiration for Hunter S. Thompson’s Dr. Gonzo in “Fear and Loathing in Las Vegas,” is the focus of a new Voces/PBS documentary.

“The Rise and Fall of the Brown Buffalo” traces the life of the preacher-turned-lawyer-turned-writer who became a central figure in the Chicano Movement before disappearing without a trace in Mexico in 1974.

Using actors to recreate Acosta’s own words and interviews from friends, the PBS documentary follows the evolution of a Baptist preacher in Panama while in the U.S. Air Force to a “Robin Hood” lawyer who defended poor black tenants in Oakland, California, and radical Mexican-American activists in Los Angeles.

He later traveled with Thompson on a drug-fueled Las Vegas trip where he was portrayed as a 300-pound Samoan lawyer in Thompson’s novel. Afterward, Acosta wrote two memoirs that become Chicano literature classics.

Director Phillip Rodriguez said Acosta’s colorful life made him a great subject. Unlike better-known Chicano activists like Cesar Chavez and Dolores Huerta, Rodriguez said everyone knew that Acosta was not a saint because of his public battles with addiction and mental illness.

Santiago Vaquera-Vasquez, a writer and Spanish and Portuguese professor at the University of New Mexico said Acosta’s books are even more relevant today because they cover the world of activism in a racist society - something many students can recognize. Vaquera-Vasquez said the “in-your-face” advocacy of Acosta helped give rise to Mexican-American cartoonists like Lalo Alcaraz and others.

The documentary airs on most PBS stations on March 23.