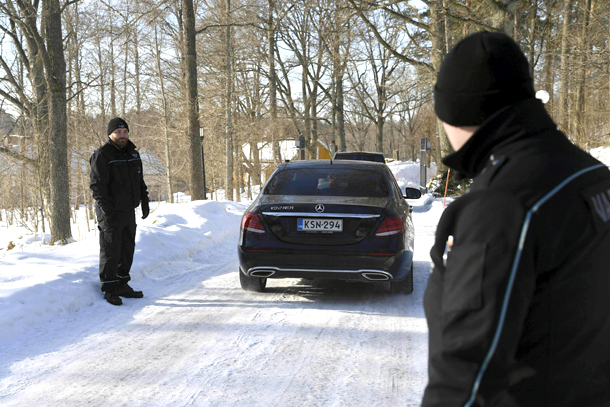 The American, North Korean and South Korean delegations arrive at Konigstedt Manor in Finland for a second day of talks on Wednesday. [AFP/YONHAP]

Ahead of North Korean leader Kim Jong-un’s landmark summits with South Korea and the United States in April and May, the reclusive regime has been engaging in whirlwind diplomacy, preparing for what many see as the young leader’s grand debut on the international stage.

Continuing its marathon of diplomacy, a North Korean delegation also is in Switzerland to take part in a parliamentary conference.

North Korea’s state mouthpiece, the Rodong Sinmun, reported Wednesday that a delegation led by Ri Jong-hyok, a ranking member of the Supreme People’s Assembly, North Korea’s rubber-stamp legislature, and director of the National Reunification Institute, left Pyongyang on Tuesday to take part in the 138th Conference of the Inter-Parliamentary Union in Geneva. Switzerland, where Kim went to school in his youth, has been mentioned as a possible neutral location where U.S. President Donald Trump and Kim can meet for their first summit scheduled for May.

The location of an earlier summit between South Korean President Moon Jae-in and Kim has been set as Panmunjom, the truce village in the demilitarized zone dividing the two Koreas. Kim has also been reaching out to the leaders of China and Russia with personal messages.

On Saturday, Kim sent a congratulatory letter to China’s Xi Jinping after his re-election to a second term as president, the North’s Korean Central News Agency reported. It was a rare direct message from the young leader. Kim has yet to visit China since taking his post at the end of 2011, and relations with Beijing have soured after Pyongyang conducted three nuclear tests despite multiple warnings. The Chinese government has been a supporter of stringent international sanctions on the regime.

In his direct message to Xi, Kim expressed his belief that “bilateral relations would develop in the common interests of the peoples of the two countries” and wished the Chinese president great “success,” according to the Korean Central News Agency.

On Sunday, Kim also sent a message to Russian President Vladimir Putin extending “heartfelt congratulations” for his re-election. It is “an expression of your people’s great support and trust in you,” Kim told Putin.

The letter, as reported by the Korean Central News Agency, said North Korea and Russia’s “relations of friendship and cooperation with a long history would continue to develop in depth in line with the desire and wishes of the peoples of the two countries.”

Kim concluded the letter by wishing Putin “bigger success in your work to build powerful Russia.”

North Korea’s nominal head of state Kim Yong-nam, the president of the Presidium of the Supreme People’s Assembly, sent a congratulatory message to his counterpart Li Zhanshu for his election as chairman of the Standing Committee of China’s National People’s Congress on Saturday.

Kim Yong-nam was said to have expressed hope for Beijing’s “success in building socialism with the Chinese characteristics in the new era under the leadership of the Communist Party.”

North Korean Premier Pak Pong-ju on Sunday sent a congratulatory message to Li Keqiang upon his re-election as Chinese premier, wishing him success and expressing hope “that the Chinese people would achieve sustained and sound development of economy under the leadership of the Communist Party of China,” the Korean Central News Agency reported.

Foreign Minister Ri on Monday sent a similar message to his Chinese counterpart Wang Yi upon his reappointment as foreign minister and state councilor.

The Rodong Sinmun also reported that Ri returned to Pyongyang on Tuesday after visiting Sweden.

Finland’s Foreign Minister Timo Soini told Finnish broadcaster MTV3 on Tuesday that denuclearization was not part of the talks between delegates from the two Koreas and the United States. The three-way meeting started on Monday with an icebreaker dinner at an upscale restaurant in downtown Helsinki.

The “track 1.5 talks,” so called because they include current North Korean officials and former U.S. and South Korean ones, officially began on Tuesday in a Konigstedt state manor house just outside Helsinki and ran through Wednesday.