Talks to prepare for talks

Talks to prepare for talks 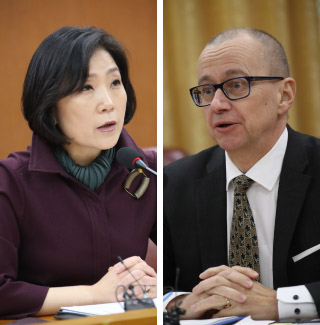 Oh Young-ju, deputy minister for multilateral and global affairs at South Korea’s Ministry of Foreign Affairs, left, and Tero Varjoranta, deputy director general of the International Atomic Energy Agency, hold talks Wednesday at the ministry’s headquarters in central Seoul. Varjoranta said his agency stands ready to do its part inspecting North Korea’s nuclear program as soon as the political situation allows it. Inspectors were kicked out of the country in 2009. Varjoranta plans to meet with Lee Do-hoon, South Korea’s top envoy in nuclear talks, on Thursday to discuss the North’s weapons program. [YONHAP]