The 2018 KBO season promises to be a wild ride

The 2018 KBO season promises to be a wild ride 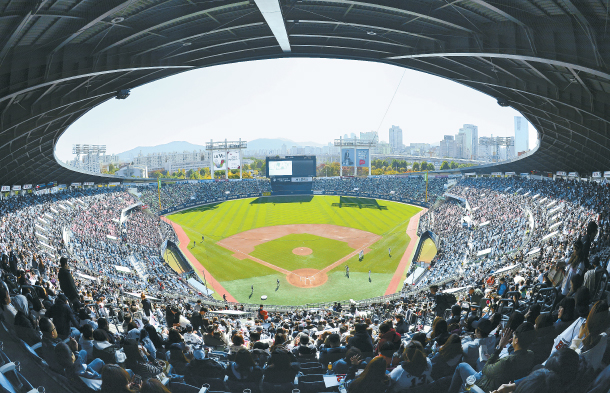 A view of the Jamsil Baseball Stadium in southeastern Seoul. [NEWS1]

The Winter Games may have come to an end, but the 2018 sports calendar is only just getting started. With major leaguers making their long awaited return and some highly-anticipated rookies finally graduating to the big leagues, the 2018 KBO season, kicking off this weekend, promises eight months of drama and excitement.

The 10 teams have tested their players and tried out new strategies during the exhibition games over the past few weeks, with the KT Wiz emerging on top with a record of five wins and only one loss.

The Kia Tigers, the reigning champions for both the regular season pennant and the Korean series, moved quickly during the offseason to keep their foreign players. In fact the Tigers are so confident in their winning formula that they made very few noticeable changes to squad, sticking with last year’s champion team. Pitcher Yang Hyeon-jong, who swept the MVP awards last season, was the last player to sign with the club.

Yang and Hector Noesi will lead the team in the pitching rotation, while Choi Hyoung-woo and Roger Bernadina will both return to the plate to lead the batting lineup.

The Doosan Bears seemed to take a surprisingly lackadaisical approach to off-season trading, with pundits guessing that the team was holding out for the return of former star and recent major leaguer Kim Hyun-soo. After the Bears fumbled the chance to entice Kim back to his old team - he ultimately went to the LG Twins, the Bears’ home-ground rivals - fans have been left wondering what the plan is for the coming season.

Kim wasn’t the only major loss the Bears suffered during the off-season. Franchise star Min Byung-hun’s decision to move to the Lotte Giants will likely hit the team hard, as will the loss of pitcher Dustin Nippert, the 2016 KBO MVP. Nippert headed to the KT Wiz after the Bears decided that his recent performance did not warrant his paycheck. The decision was so controversial that Doosan fans took to the streets in protest.

Despite the big losses, the Bears didn’t end up bringing in any big name players, instead choosing to focus on developing their younger players. The addition of foreign players Josh Lindblom and Seth Frankoff are expected to shake things up, and the management remain confident that the Bears will return to the KBO as strong as ever this year.

After 26 years without a Korean Series win, a faint glimmer of hope is starting to grow down in the Sajik Baseball Stadium. The Lotte Giants pulled out all the stops over the last few months in an attempt to finally field a team good enough to take the championship - and this season they might just have done it.

The Giants momentum really began to build in the second half of last season, with the team catapulting into third place by the end of the year. Though they failed to advance beyond the second playoff game last year, the Giants are confident that the addition of Min and the return of captain Lee Dae-ho will give them the batting power they need to top the league this season. Though there is still a hole in the team - the loss of veteran catcher Kang Min-ho and a weakness at third base - the addition of Min has raised expectations for a successful postseason bid now that the club has the KBO’s best batters.

For a team that has only been in the KBO for five seasons, the NC Dinos have already racked up an impressive record. Riding on the back of four consecutive postseason finishes, it seems like it’s only a matter of time before manager Kim Kyung-moon finally gets his first championship win.

The Dinos roster has undergone some changes coming into this season, with both foreign pitchers leaving the club. Kim has stayed true to form, focusing on developing young talent within the team. The addition of Taiwanese star Wang Wei Chung will give the Dinos some more power on the mound as they gear up for yet another run at the postseason.

The SK Wyverns could prove a real threat this year, with the KBOs top batting lineup returning at full strength. Last season, the Wyverns hit the most home runs in the KBO but showed weakness in their pitching rotation.

The Wyverns, the only KBO team that has a foreign manager, started poorly last season but pulled back in the second half to reach the wildcard game. Led by 2017 KBO home run king Choi Jeong, the team blasted its way to fifth place relying solely on its offensive game.

With the return of Kim Kwang-hyun, who had to miss the entire 2017 season due to an elbow surgery, the team’s pitching rotation may now match its batting strength.

Like the Giants, a season win has been a long time coming for the LG Twins. The team, which hasn’t won the pennant or Korean Series since 1994, has struggled to find its place for the last few years, with eight different managers passing through the team in the past eight years. This year manager Ryu Joong-il, who led the Samsung Lions to win both the regular season and Korean Series for four consecutive seasons, will take the helm.

But Ryu’s reign got off to a rocky start. Deciding to start with a clean slate, the new management abruptly cut the majority of the starting roster, drawing the fans out to Jamsil Baseball Stadium in process. It wasn’t until Ryu managed to sign Kim Hyun Soo, long expected to go to major rival the Bears, that the fans decided to give him a chance.

Although it is still not entirely clear what the roster is going to look like for the regular season, the addition of Kim has immediately impacted the team, finishing the exhibition games with a record of four wins and three losses.

The Nexen Heroes also managed to pull in a major leaguer to help carry the team in the upcoming season, signing Park Byung-ho from the Minnesota Twins.

Park didn’t waste any time announcing his return in style, raining home runs down throughout the exhibition games to reclaim his spot as one of the KBOs best sluggers. Park’s emphatic return is likely to set the Heroes up with a good chance of reaching the postseason - the team missed out last year for the first time in five seasons - and attract the fans back to the Gocheok Sky Dome.

Along with Park, 2017 super rookie Lee Jung-hoo is likely to bring some more power back to the Heroes. Lee was already well known before his debut last year due to his famous father, Lee Jong-bum, but as the season went by he made a name for himself.

Of the 10 KBO clubs, the Hanwha Eagles are probably the most desperate this season, as they haven’t advanced to the postseason for 10 consecutive years. Though the Giants hold the record for the longest time without a Korean Series victory, the Eagles have had the longest postseason drought of any team in the league.

Things went from bad to worse for the Eagles last year after former manager Kim Sung-keun resigned from his position midway through the season. The club was given no choice but to play the rest of the season with interim manager Lee Sang-kun.

The return of Han Yong-duk as the Eagles’ manager might change the team’s atmosphere completely. Han, a one-club man who played exclusively for the Eagles from 1987 to 2003, is expected to bring the fans back to the stadium - he even brought an Eagles’ franchise star back as a part of the coaching staff.

The remarkable downfall of the Samsung Lions continued unabated last year, with the once dominant finishing the season in ninth place. Looking at the exhibition game results, the Lions aren’t looking too good for this season either.

While the other teams made an attempt to strengthen their roster by signing big names in the FA market during the offseason, the Lions haven’t made much investment. Making it worse, the Lions are yet to find a replacement for Lee Seung-yuop, who retired last year. Koo Ja-wook, is expected to step into Lee’s shoes, along with KBO’s veteran catcher Kang Min-ho, who made a surprise move from the Giants.

For the KT Wiz, the youngest team in the KBO, the goal for this year is not to finish last. Since the Wiz joined the league in 2015 they have always finished at the bottom of the table, but a spending spree during the offseason has things looking up for the men in orange and black.

The Wiz started with drafting Kang Baek-ho, the top rated high school baseball player, in the rookie draft. Based on his performance in the exhibition games, Kang raised higher expectations that the Wiz have managed to bag the KBO’s next big slugger.

After signing Kang, the Wiz dropped 8.8 billion won ($8,184) to add former major leaguer Hwang Jae-gyun to the team. But it wasn’t only the batting lineup that the Wiz strengthened.

The addition of Nippert is likely to add more depth to the pitching rotation alongside Ryan Feierabend, who had the lowest ERA last season.