Time’s up for Abe

Time’s up for Abe 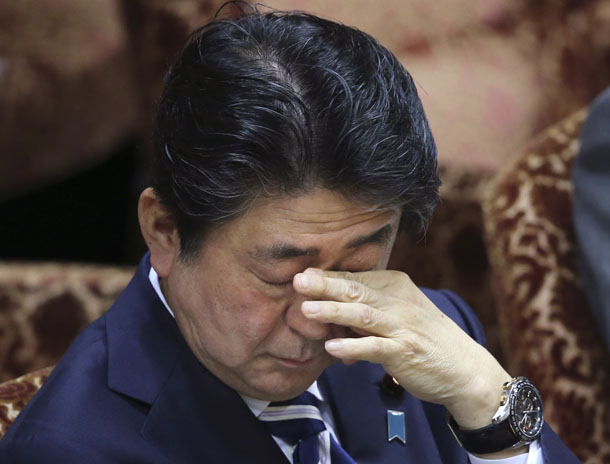 Japanese Prime Minister Shinzo Abe rubs his eyes during a meeting of the upper house budget committee at the parliament in Tokyo on Monday. His approval rating has plunged amid a widening scandal involving the sale of state land to a school linked to his wife, possibly risking chances for his third term in party leadership. [AP/YONHAP]

The Moritomo scandal has sent Japanese Prime Minister Shinzo Abe’s approval rating to a record low, just as the prime minister is aiming for a third term in September. Polls show him at 44 percent, down from 31 percent last month, as he faces a political crisis stemming from special favors that were allegedly granted to private schools operated by people close to him.

Abe’s approval rating is the lowest since he entered office in December 2012. The Moritomo scandal has stirred Japan over the past year, and the possibility of Abe’s exit has been raised after a Finance Ministry official was found to have fabricated documents related to the sale of state land to Moritomo Gakuen, a chain of private schools.

We can read changes in Japanese politics from the scandal. First, support — and opposition — toward Abe, a symbol of right-wing politics in Japan, is intensifying. Unlike other prime ministers, Abe has loyal fans and avid opponents.

Protests calling for the resignation of an incumbent prime minister are rare in Japan. The only one in recent history was a mass demonstration against the revision of the mutual defense treaty between Japan and the United States that was promoted by Nobusuke Kishi, the maternal grandfather of Abe.

Now, protests have reappeared as Kishi’s grandson, Abe, has emerged as a conservative icon. More than 30,000 Japanese rallied in 2015 to oppose a new security law pushed by Abe. In response to the Moritomo scandal, Japanese are again protesting Abe en masse. They have begun a political fight, a struggle between liberals and conservatives. But a few liberals alone cannot stop the country’s swing to the right.

Abe’s “presidential” authority is under attack for the first time in Japan’s parliamentary system. The fabrication of official documents on the discounted sale of state-owned land to Moritomo shows how government officials are aware of the influence of the prime minister’s office. The allegations that the Finance Ministry, whose bureaucrats are considered the most elite in Japan, fabricated government documents for the prime minister turned out to be true.

Until the 1990s, Japan was a nation of bureaucrats. Not even Takeo Miki, the prime minister from 1974 to 1976, could overrule the HR director at Okurasho, the predecessor of the Finance Ministry. In the 2000s, Foreign Minister Makiko Tanaka had to stage a sit-in to protest her own ministry’s HR director.

Abe, on the other hand, has successfully concentrated appointment authority in the prime minister’s office and made bureaucrats surrender. In the era of Abe, the long power struggle between politicians and bureaucrats has come to an end.

It is notable that Japanese people believe the cause of the Moritomo scandal to be a governing style based on excessive power concentrated in the prime minister’s office. Therefore, the fall of Abe would not represent a failure of conservative policy but an end to Abe’s personal governing style.

The legislative election in October 2017 showed that voters have grown tired of Abe’s authoritarian style. While it seemed like his Liberal Democratic Party had a landslide victory, it was more a defeat of divided opposition parties than a decisive win for the ruling party.

Even though people loathe Abe’s hard-line conservative style, opposition parties have been unable to win more seats. The Liberal Democrats have been able to maintain a majority because the opposition has presented few alternatives. While the ruling party has retained its dominance, Abe’s approval rating has fallen and his control over politics has weakened.

While opposition parties are attacking Abe for the scandal, the context for the next prime minister has begun in the Liberal Democratic Party, suggesting Abe’s unstable position in his own ranks.

The Komeito, a partner of the ruling party, is on a separate track. After the Komeito lost some seats in the 2017 election, they have become uncertain about their coalition with Abe. As a result, the constitutional revision that Abe is promoting is unlikely to get consent from the Komeito and unlikely to pass by 2020 as Abe had hoped.

Contenders for a post-Abe Japan are likely to advocate an Asia-centered policy rather than Abe’s extreme focus on the Japan-U.S. alliance. To distinguish themselves from Abe, they may also seek improved relations with China and cooperation with South Korea. We can hope for a flexible response on issues of wartime history as well.

However, since Japanese politicians distrust North Korea, it is uncertain if Tokyo will actively support Seoul’s policy of engagement with Pyongyang. In moments like this, active communication with Japan will surely help.

*The author is the president of the Sejong Institute.